It was a momentous day.  Dave started on the final pillar and I filled up the gap – so at last we’ve laid bricks the entire length of the wall.  It was another beautifully hot and sunny day – just the weather we had hoped for last year and didn’t get but, although we’re out in full sun for two or three hours, we haven’t had any problem with headaches or sunburn.  Of course we slap on the sun cream and drink plenty of water.

We had cleared away all the pots and weeds and general *stuff* from both sides yesterday, so we had a clear run.  We both worked kneeling down, so there were some twinges of pain, especially for Dave, whose back doesn’t really like to be bent over, but at least it gets better as you build up. 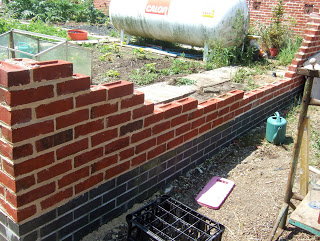 Dave had dropped casually approving mention of toasted cheese the other day, so that’s what we had for lunch, with bacon.  The bantams loved it.  Dave gave away his bacon rind and the lucky recipient grabbed it and ran, followed by two other hens.  A couple of minutes later she reappeared, bacon still hanging from her beak, with one bird still chasing her, but she successfully outran her and disappeared into the bushes to eat her trophy.

This afternoon, I’m putting my feet up for a bit with the papers.  I’ve a stern letter to write later, but suspect I’ll write the vitriolic version first and then calm it down to a more measured one.  More effective, usually, even if it doesn’t quite relieve the feelings so much.