I left the gentlemen to it today, just providing tea, the occasional encouragement and lunch at the end.  Yay, sausages.  Aren’t sausages the finest of foods?  (For vegetarians, read Glamorgan sausages or tofu sausages or whatever Linda Mac provided as a meat substitute).

Knowing that Dave doesn’t really do green, I served tomatoes and carrots (no chips, sadly) but he ignored the latter.  Emboldened by this, so did the Sage.  Wonderful as he was during my convalescence, I did yearn for more vegetables.  He actually likes veg, but I suspect he doesn’t think they are quite manly.

Anyway, nothing spectacular is happening to the wall at present, but excellent progress is being made all the same, because it’s the finishing-off stage. 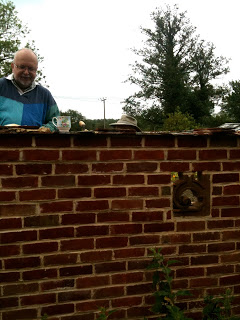 Pugsley laid a tile (the behatted Sage is just behind it). 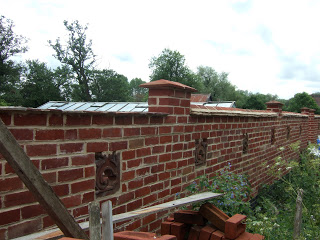 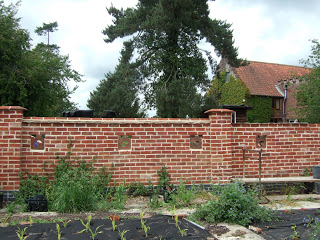 This section of the wall is now complete.  Tomorrow, we hope that the wall will be finished up to the corner.
This afternoon, as it was warm – it was supposed to rain this afternoon, but I was not surprised when it didn’t – I left the door open.  I heard an amount of banging about in the porch and, suspecting bantam activity, picked up my camera and went to look.  There was our oldest girl, having decided she’d gone far enough, about to leave. 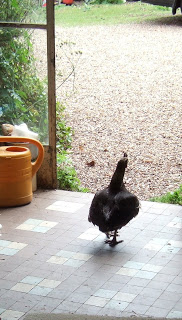 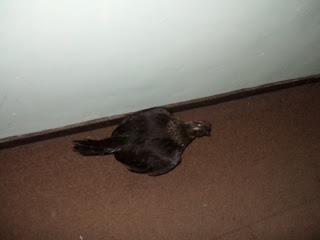 Later, I heard sounds in the passageway.  She had clucked* up more courage and come indoors and was checking out the kitchen.  She strolled out eventually.  I’d taken the precaution of shutting the drawing room door, Tilly would have been affronted.  She wouldn’t have done anything, but she would have been very put out.

*see what I did there? 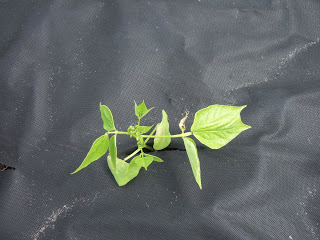 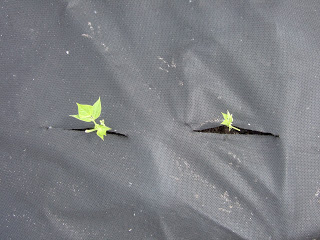 By the way, for those of you who think we’ve been mean, shooting a rabbit, a picture of a flageolet bean that it didn’t eat, and one of two that it did.

Today’s app (these are not necessarily only just downloaded, just things I use/play regularly) is Bottle Hunt.  Keep on the sound effects, the sound of breaking glass adds to the pleasure – it’s not a game to take seriously, just to enjoy for a few minutes at a time, and you may want to turn up the brightness.   I’ve cleared the scores several times and am working on full marks (breaking every bottle) on every round. And it’s another free one.  I actually spend very little on apps, and always try free versions of games if they’re available – and if they’re not, I generally don’t bother.