The final course of bricks along the longest part, at last. We’d all agreed that it would be best for it to be done in a single stretch from one end, rather than us working together, one from each end. So there wasn’t anything for me to do, as it was easier for Dave, being taller, to do it rather than for short-arse Z. It made it a long morning for him however, and he didn’t finish until after 1pm. Far too windy to enjoy lunch on the lawn so we ate it in the dining room. 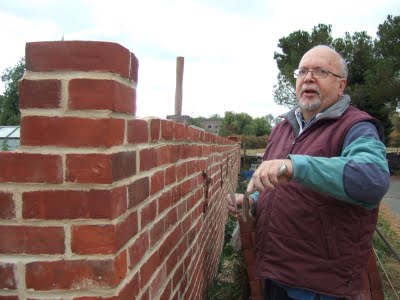 The third and fourth bricks had yet to be tapped down, after which the whole wall was precisely level. 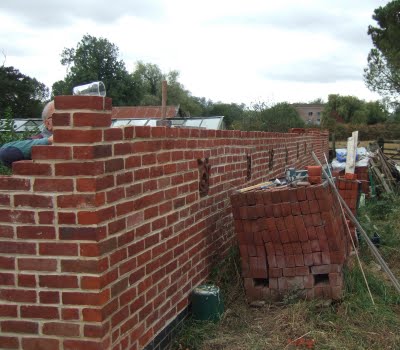 Next week the Sage is quite busy, so we won’t have a chance to get together with Dave until Thursday. There’s a definite change in the weather this week – it so often happens that a new month brings about different weather – so I hope that we don’t get too much rain. It’s raining right now, the Sage says.

The most exciting thing that happened this morning, apart from the final laying of the last brick of this session, which one might refer to as a milestone, was when Daphne phoned to say there was a cow out. The Sage set out across the field and I went down the drive on my bike. We found Ann cuddling Big Pinkie (wash your minds out, people, Pinkie is a cow). We soon found where she had squeezed under the wire, as there were tufts of hair on the barbs. Fortunately, Stephen was going past (he’s the helpful chap who saved me from the icy waters some years ago, did I tell you about that?) and he helped the Sage take down the wire, because there weren’t no ways Pinkie was going back the way she’d got out. Ann went and fetched an apple, because you can’t drive Pinkie, only lead her – she’s an independently minded cow and she was quite happy where she was. 202, the other cow (you may name her if you like, she’s more black than white and friendly with a non-raspy tongue) looked rather jealous. They are grazing some 7 or 8 acres, but it hasn’t rained for months, there’s little grass left. Either the farmer needs to bring hay or fetch them back to the farm. She reluctantly followed us back onto the field and gave 202 a shove for trying to share her apple.