Dave had brought along a dear little girly’s trowel. Since I am, myself, a dear little girly, I found that this was much easier to use and I happily built wall along with him. We had to make it a short morning, as I was babysitting in the afternoon, but we have agreed that we both want to have fun building this wall at our leisure and neither of us want to over-exert ourself, for health and fitness reasons.

I have realised that I can’t manage the labouring part of the job – mixing the mortar in the cement mixer – as I’m too short to get a shovelful in the machine without spilling half of it. Fortunately, the Sage doesn’t mind. I’ve told the whole family that they are all welcome to lay some of the bricks too – and I mean it, you can too if you like. Liberty Hall and all that here, and you’ll get lunch, although Dave has found it to be bread and cheese so far. We only work in the mornings so that we can return to Real Life after lunch.

BW suggested that the men are rather well-dressed for bricklaying. Dave’s jeans do, indeed, look rather smart until you look closer – 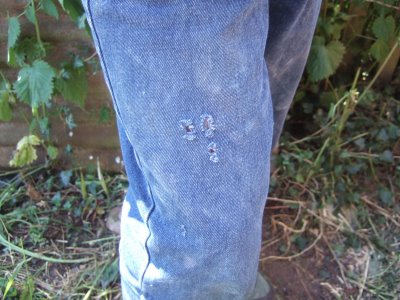 If she’d seen my jeans, she’d have made no such suggestion 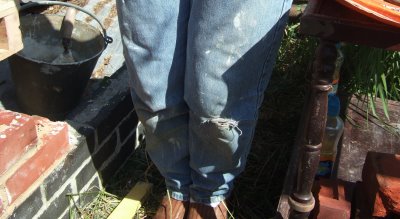 These were Weeza’s, some 20 years ago. When she tired of them I adopted them until they went into holes and since then I’ve only used them (when they fit, hem hem) for painting and suchlike jobs.

The Sage wore what he usually wears. He would wear it for shovelling cement or for dining with the Queen. Smartness doesn’t , therefore, come into it.

The results of today’s endeavours. I had difficulty in getting far enough back to get it all in; the wall is not on the huh*, it’s the camera. 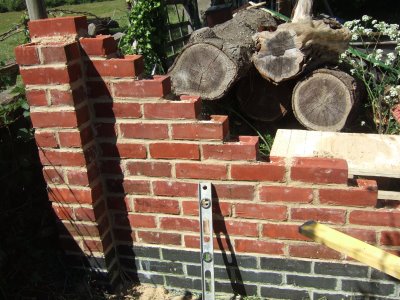