Russell’s parents bought this house in 1928 when they were newly married and lived here for the rest of their lives.  We moved here in the summer of 1986 but we had spent the previous year or so having repairs and improvements done.  As it’s a listed building, we had to get planning permission for all the changes.

Today, Stevo and I were tackling the big workshop – it had been cleared of most of the big machinery last summer but the end with the workbench still had a lot of stuff in there, much of it rubbish.  While Stevo was barrowing a load of paper and bits of wood to the bonfire, I found a lump of something odd on the floor. 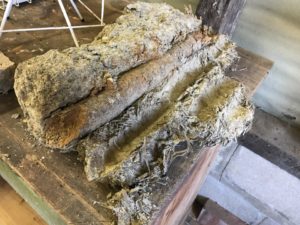 It took me a few moments to realise it’s a piece of the house.  The wood is one of the hazel (I think) wattles that are the wooden uprights, packed around with a mixture of clay and straw.  I don’t know enough about the construction of timber-framed houses to tell if it’s clay lump construction or wattle and daub, but this is what this house was made from, back in the 16th century.  The main structure of the house is oak, of course, and it was brick faced at some time – the bricks are old but not Tudor, except for those in the area of the oldest fireplace.

The wood is completely worm-eaten, quite powdery, but we did find a strong, intact piece back in 1984 and my brother-in-law made a walking stick from it, which I’ve written about here before.  Here it is.

I’ve kept the piece of clay of course, I couldn’t throw it away.   Better not let it get wet, though.

3 comments on “Back in time”