If you have three minutes to spare, do watch this – Owl and the Pussycat.  There is music, in case you need to turn the sound down first.

It’s been a busy morning.  We knew that a party of 20-something was going to be at the Communion service, because there was a burial of ashes at 10 o’clock and the family was coming to church first.   I was asked to help with the Communion, something I’ve always avoided assiduously in the past.  However, of the others who might have helped, one was making breakfast, one was sidesman and one was in charge of the children’s crafts and the later service and there was no one else to fob the job onto, so I didn’t quibble and took charge of the chalice for distribution of wine (actually port in our case, you need fortified wine for Communion and I buy it and get something worth drinking).  After that, the family went out for a brief prayer and interment of the box of ashes and then piled indoors again out of the snow for bacon or toasted cheese sandwiches.  I made tea and coffee and helped with the washing up.  After that, I hauled out my clarinet and played for the family service.  No, I wasn’t the hardest working person there.  Five of us were equally busy.

A few photos to round up the week. 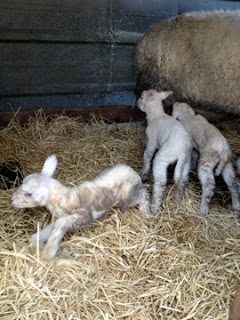 Triplets were born here a few days ago.  They are now safe and warm in their owner’s barn with the other ewes and lambs.  One more ewe is due to lamb then she, with the ram, will be taken home until the babies are a bit older and the weather improves.

Before the snow came back 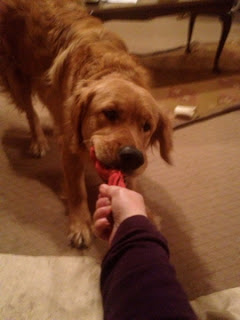 Ben enjoyed a game of tug of war the other evening.  He won every time.

Afterwards, he needed a little rest.

Here are the daffodils by the drive this morning.  They look about as cold and miserable as flowers can be.  It’s about 1º Celsius at the moment, but feels a lot colder (according to the Met. Office, it feels like -5º) because of the biting wind.  Snow is lying on the field but has mostly melted from the road.