So, this morning I watered the tubs and vegetables and went to church.  One of the hymns, which I hadn’t practised in advance, had the wrong tune in the book.  In two books.  The other two books didn’t have the hymn at all.  So I warned Sue, who was taking the service, and kept browsing through the metrical index.  I finally found it, but didn’t have a chance to play it through, of course.  “I know what you were doing through the sermon…” she said later.  I got through it of course, one of those ‘right hand tune, left hand random chords’ occasions.

I’ve caught up on the washing!  Of course, that happy state of affairs lasts a single day, until one undresses in the evening, but all the same…  I’d put on a nice dress, but changed into shorts and a t-shirt later – I know, darlings, none of you has ever seen me in shorts and nor will you, unless possibly on a beach.  I’m far too old, nothing sadder than a 1661.

In the afternoon, I wanted to watch the tennis, so couldn’t possibly be idle all that time – what, me?  Idle?  Well… (I’m far too fond of the ellipse, I know) anyway, I was resolved to do the ironing. 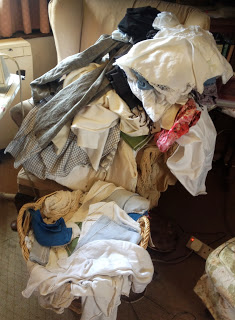 I ironed solidly for five hours.

This is what 111 napkins looks like.  The ones on the right are the linen ones.  I forget how many, over four dozen. 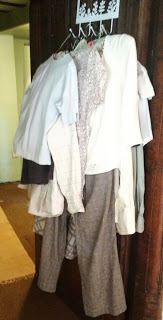 Most of the clothes are mine, I keep up with ironing Russell’s shirts.  I even ironed 14 (sorry, I counted nearly everything in the end, but I had been ironing for FIVE HOURS) handkerchiefs and noticed one that was particularly pretty.  So was the next, and it had embroidered initials, CF.  When I checked, so had the previous one. 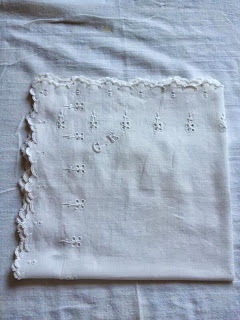 Miss Fitt was the old lady I’ve told you about before, who lived to be 102 and a half.  She was an expert needlewoman, even her pocket hankies were exquisite.  I’m rather happy to think that I’m still using them, at least 50 years after they were made: she was born in 1882 so they could be Victorian, but she continued to do needlework until she was in her seventies.

The final four tablecloths defeated me.  Have I mentioned that I ironed for FIVE HOURS?  I’ve re-rinsed them and will part-dry them again, so that I can iron them damp tomorrow or Tuesday.  By the way, a tip on ironing napkins that have dried – dampen every other one and make a stack – the damp will work through them all and each one, as you get down to it, will be part-ironed already.