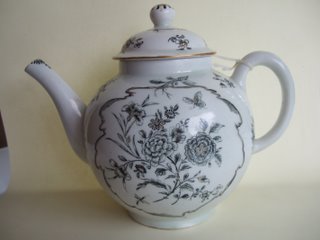 Lowestoft, about 1780. It pours well but I don’t make tea in it. 18th Century glaze isn’t really up to boiling water any more. Not a good photo I’m afraid, I should have removed the gap by the background, also there could have been a more flattering colour. Oh well.

I’ve been remembering again. Not something I usually do much of, reminiscing. But this was another wedding anniversary back in 1989. We spent the weekend in London. We stayed with our nephew in Hackney and, on the Sunday, went to the church of St Martin In the Fields in Trafalgar Square for the baptism of my goddaughter, the baby of my schoolfriend L. At the end of the service, the Rector held the 3-month-old girl high in the air above his head and carried her down the aisle. She played her part magnificently, gazing fascinated at the lights and showing no fear or uneasiness.

Afterwards we, with the baby’s family and the other godparents, went to a Chinese restaurant for lunch. After that, we went to Sotheby’s auction house to view a sale that was to be held the next day. The Sage and I fell for a teapot, decorated in pencil and gilt. He also mentioned that he had been commissioned by clients to bid for some other lots.

The next day we returned to the sale itself. It was only then that he decided it would be best if I did some of the bidding. I had never bid in a London saleroom before and I was alarmed to say the least. He wrote down the lot numbers and prices and warned me not to go above what he said.

The first of ‘my’ lots came up. I waved my catalogue anxiously at the auctioneer. Once you catch his (in this case) attention, he glances your way to see if you are still bidding, but no need to worry, he knows that scratching your ear is scratching your ear and you will not find you have bought a Ming vase without realising it. I bought a couple of lots, then was outbid on the next and shook my head. “Keep bidding” hissed the Sage. I waved again. And bought the item.

Our teapot came up. It soon exceeded the guide price but —- that was too low anyway, salerooms are often rubbish at getting the estimate right.

After the sale, we paid for the china and it was packed up for us. We went off to Liverpool Street station, the Sage to catch a train home and I to go back to Hackney. My visit wasn’t over yet.

Nephew S. gave me trout, salad and white wine for dinner. The next day I went off, first to John Lewis in Oxford Street where I bought a very pretty straw hat which I still have, though I only wear it in the garden now as it’s a bit battered, and then to the Chelsea Flower Show. It was a blistering hot day, but I was all right because I had a floaty cool dress on, my hat to shelter my head, talcum powder to sprinkle in my sandals so that they wouldn’t rub my feet and, um, I didn’t put on any underwear. Well, I was young and slim then and it was not a dress that made the fact evident, I got away with it. And, as always, Chelsea was wonderful.

And then I went home. The next day was our anniversary, but I can’t remember anything about it except that we were very happy with our teapot.