If I can persuade pictures to load, they can tell at least a few of my thousand words – I’m far better with words than pictures on the whole, but that’s because I’m so very prosaic. 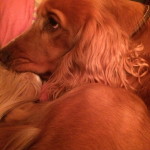 Rupert is adorable, there’s no question of it.  It’s been a bit tricky, on and off, because none of my grandchildren, with the possible exception of Hadrian, is very confident around dogs and Ben is so very bouncy.  So sometimes one dog and sometimes both have had to be put into another room, to their dismay because they’re very affectionate and sweet-natured.  Roo has gone home with his family now, but he’ll visit again soon. 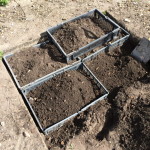 Here is an indication of my plans for Edweena’s summer residence.  The plastic crates, which used to hold punnets of strawberries, are about 2 feet by 18 inches, so fit nicely into my kitchen garden beds.  Russell was disconcerted by her habit of tunnelling, so if these are filled with earth, she can burrow down so far and no further.  They need sides of course, so the run is yet to be finished. 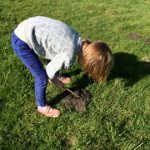 Zerlina is fond of playing poohsticks which, in our family, is rather more literal than in Milne’s books.  It involves stirring up cowpats with a stick.  Yes.  You can tell she’s my family. 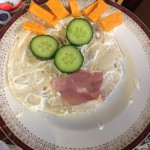 I always modelled myself on Morticia Addams – “Play with your food, Wednesday.” 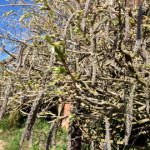 It is, in truth, too soon to be sure, but if we don’t have any dreadful frosts, the wisteria is going to be wonderful this year.  The buds aren’t that clear in the picture but, believe me, there are hundreds of them.  And the lilac is just coming out, nicely in time for Easter. 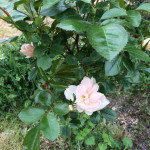 Rather more unusually, a few early roses are in full bloom.  So pretty.  I’ve agreed to do the altar flowers for the Easter Sunday service, so have bought white lilies and, rather randomly, pink tulips and have picked greenery to go with them, which is all in a bucket in the kitchen.  Usually, I’d put it all in a cooler place (and I might move the tulips tonight) but the lilies are only just showing colour, if one can so describe white. 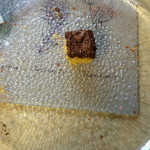 Weeza & co are coming for lunch tomorrow and, since Easter has rather caught me unawares, I emailed around today to see what the rest of the family are doing (or should that be ‘is’ doing?).  Al suggested coming over Right Now – this was around 3.30 – so I sped into the kitchen to make a cake, which I decorated with chocolate butter icing and a crumbled chocolate flake.  We all had second helpings (still slightly warm when served, quite irresistible) and a couple of us had thirds.  Yes, one of them was me.  There was one square left at the end, which I trust that Russell will eat, because it seems wasted on the bantams.

It’s been chilly today, too cold for the Tots outside, so I didn’t put Edweena out either.  In fact, the Tots have mostly napped underneath a piece of bark, whilst I’d rather they basked and ate, so it wasn’t a bad thing to have them indoors for a day.  Should be warmer tomorrow, but possibly wet.  But it’s a Bank Holiday weekend, what can you expect?

I have no idea why the pictures have published on the slant, but it’s quite pretty, innit?  If I wanted to do it again, I’d have no idea how.

5 comments on “Z’s week in pictures (and words)”