It’s been such a muddled day and I still have a lot of work to do, so this’ll be a quickie, darlings.  I was going to do the condition report, and the Sage would have done the fetching and carrying, but a friend of his died a couple of days ago and his wife wanted some help, so of course he put her first, which was entirely the right thing to do.  So I got myself set up, laptop, tray of china, list of lots – and then got an urgent call into the high school.  So everything got locked away again and off I went.  On my way home, actually turning into the drive, I got an alert that it was time for Meals on Wheels, so I swung round the drive and went straight back out again.  Then when I got home, the phone kept ringing, and I finally got started and then Dilly called in, so it seemed a good excuse to stop for coffee.  And then an email that needed answering straight away and some typing led from that – I felt quite harassed by the time the Sage came home – and then I wanted to talk to him but a friend who can’t drive any more phoned asking to be taken to the post office, and then someone called for the Sage and I had to talk politely until he came home again and couldn’t carry on with any work.  It took until 4 o’clock to do a job that should have taken about three hours.

Then I had to go to Beccles because there isn’t a cobbler in town any longer and the shoes I want to wear on Saturday needed to be reheeled, and I’ll have to pick them up tomorrow.  And the Sage’s phone shows the wrong number and I am past bothering to try to sort it out myself but will go to the shop and ask them to do it, but that’s another trip to Norwich.  Frazzled, darlings?  Just a bit.  I’ve not sent out the minutes from the meeting the other night yet, nor sorted out the Meals on Wheels rota – two of my helpers are having operations and won’t be able to drive for the next couple of months.  And that’s before Nadfas – Friday is another deadline because we’ve got a meeting in a fortnight.  I’m all ready except I’m waiting for someone to send me their address before giving out an up-to-date list.

So, let’s say something positive…well, I did do the condition report, so that’s good.  And we had our first courgettes tonight, and tiny and delicious they were.  Rather late this year, but no matter.  And I’ve got another picture of a partridge chick for you. 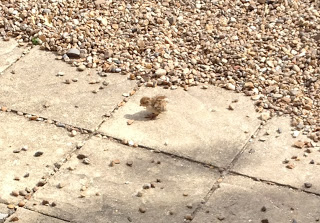 Too sweet for words.  The mother didn’t mind me going close at all.

Back to work now.  Hang on, the Sage offered me coffee half an hour ago – better go and check whether he forgot to make it or forgot to bring it through.  Or just switched the kettle on, which is frankly the most likely.