We’re finally back on our internet booster, wirelessly.  The router doesn’t quite have the gumption to get to both our drawing room and Al and Dilly’s house without it so, whilst we were able to use that, we had to be in the kitchen.  The options on the booster website were beyond my comprehension, but I hadn’t felt able to bother Ro last week as he was really busy at work, and Dora was leaving for Thailand to visit her brother on Sunday, so I didn’t want to interrupt his weekend either.

Today, however, we helped each other out.  I was going to Norwich to pick up Zerlina’s present, and offered him a lift home afterwards, to save a long walk with shopping.  I had a bit of a decision-wobble in the afternoon because of the weather, but the snow stopped by the time I was at my destination and hasn’t started again yet here, although apparently it has in Norwich.

However, let’s start at the beginning.  As so often, I was awake early and up late, and found there was a pleasing amount of snow – not enough for us to be snowed in (this often has happened in the past) but a decent couple of inches.  So, later, when the sun began to shine through, I trotted out to build another snowman.

Al and Pugsley had already been busy.  The little chap who’d been built at the weekend was decently dressed, and he had a companion.

It was a lovely day, and the snow was starting to drip from the tree branches, so I spent the next happy hour making my snowman in case it melted further. 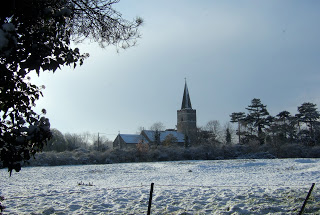 Al had been asked to mind the shop for a couple of hours, so he left Pugsley with me.  He was quite happy roaming around in the snow while I worked, but he didn’t think much of my attempt to sculpt arms.  He thought I should have used sticks.  It was snowing quite hard by the time I finished though, so I hastily gave him a face, took his picture and went indoors. 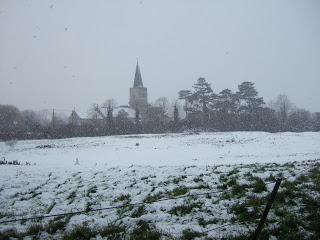 This evening, Ro was talking me through the procedure when we got cut off – the landline phone rang a minute later so I thought it was him, but it was Weeza.  Then Ro rang back on my mobile.  I promised to phone Weeza back, got the internet working, phoned Al to ask him to check, phoned Weeza, then Al rang back – I needed extra ears and was about to run out of telephones.  Still, all is jolly good and we are hoping to get together at the weekend.