Another day cleaning the new house.  I think I can detect why the previous owner was so peculiar – that is, I don’t know whether he had been to start with or not, but the way he lived there was enough to bring anyone to the verge of a nervous breakdown.  He lives in London and worked on the house at weekends, but in seven years he had not made a single room habitable.  None of the bedrooms had ever had its floor swept, they were thick with builder’s dust; no floor had been laid, they are all concrete downstairs and chipboard upstairs; no walls had been painted, they are all plastered.  He had put in some furniture and the kitchen was fully equipped with cupboards, oven, dishwasher and so on, but it was dirty and depressing.  If he had just painted the kitchen and the two smaller bedrooms, one to use as a living room, cleaned them and livened them with rugs and so on, he would have enjoyed spending time there.  As it was – well, as Phil put it, if he’d not been so inept, they’d not have been able to afford to buy it.

I’ve also been looking at their holiday pics and it’s lovely to see them looking so relaxed.  It’s been a nerve-wracking time.  In fact, it was Weeza’s boss who suggested the break as he and his family were visiting their holiday home in the Bergerac area (I say vaguely, I hadn’t heard of the village and can’t remember its name) and invited them to go too.  Zerlina is very friendly with their little girl: Weeza and his wife met at parent and toddler group and that led to W being offered a job.

One day, Zerlina and the other little girl whom I shall call Zuleika, went with Weeza to buy some food for dinner.  They saw rabbits in the local butcher’s and were fascinated and wanted W to buy them.  They were skinned, I should say, but still had heads on, including eyes – I know!  It was macabre.  They chose the most grotesque and, once W had cooked them with green olives and tomatoes (I don’t know the recipe, but that was what were mentioned) they tucked in enthusiastically.  All four children ate whatever was put in front of them, they were happy and got on well together, it was a lovely holiday.  Augustus managed to fall in the swimming pool twice – W said it was scary, how quickly and silently he dropped – but was instantly rescued and overall it was the break they needed.  Weeza said it was very good to go away with another family as they shared cooking, the children could play with each other and there were babysitters if they wanted to go out for dinner.

While I was envying holidays, I went to look at Ro’s Facebook page but I suppose it’s the difference between having children and not – 275 pictures from Phil, 4 from R, of Paris and Nice where they visited by train.  But here they are – 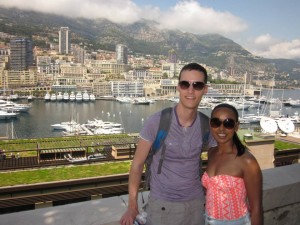 People say that Nice is ruined and commercialised and so on, and maybe it is – I wouldn’t know, I’ve never been there.  But they they say the same about Venice, and I loved it there when I visited.  But I don’t get out much and it’s not hard to impress a Norfolk girl.

3 comments on “Z starts to think about holidays”