This morning, I went to my music lesson (where I’m an unpaid teaching assistant) at the high school. At the start, the Year 9 class came in, dumped their bags in the corner and sat down. One boy didn’t put down his bag and only remembered when the teacher was taking the register. When she was putting it away again, he chucked it (well-stuffed rucksack) over the heads of the other pupils and onto the pile of bags. It skimmed just above the head of a tall lad, who looked up, puzzled, stroking his head to see what had ruffled his hair. Only N, the boy who’d done it, a few children around him and I saw it. It was incredibly funny and I grinned. “Good aim, wasn’t it?” he said. “Very good aim” I said mildly “but perhaps not a good idea, could cause an accident.”

Later, the children were in small groups practising the musical arrangements they’ve been working on (they don’t know it yet, but next term they’ll write their own compositions) ready for recording and I went to help N’s group with the drum accompaniment. It’s just started to dawn on them that I don’t behave quite like anyone else in the school. Last week a lad in a different class asked me what I do there, and today N asked the same question. I told him, I’m in to lend a hand as a teaching assistant, and I’m an unpaid volunteer. He looked bemused. “You can’t tell us off though?” asked a girl. “That is, you didn’t when N chucked his bag, you laughed.” “I can,” I explained. “I just don’t have to.”

Oh, by the way, and I realise this is a pathetic thing to think of as an accomplishment, but I finally made it all the way up the hill without having to get off the bike and walk at all.

Afterwards, I went to take over from Al at the shop for a few hours so he could go and help Dilly with Squiffany’s birthday party. 8 little friends from nursery school, plus their younger siblings and their mothers. When Al returned so that I could join the end of the party, we chatted for a few minutes as I got ready to leave. He told me something that quite upset me. A nearby small town had a branch of Woolworths, which closed just after Christmas. The discount store QD is taking it over and they advertised for staff. They had 25 places. 1,000 people applied. Yes, one thousand. They were asked if they were interested in part- or full-time jobs. Nearly everyone said that they would accept anything at all. I wanted to cry at the sadness of their desperation.

When I got back, the party was nearing the end and 15 or so toddlers were milling around happily. Zerlina smiled to see me and I gave her a cuddle. She was 7 months old yesterday. “I’ll give everyone 2 more minutes to finish eating tea” said Dilly “and then we’ll have a last game of Musical Statues.” She’s very good – for each round she told them what they should do when the music stopped, such as be a dragon, be a princess, hop like a frog, hold up an umbrella like Mary Poppins. The children loved it and I felt all emotional again. Fortunately, this is permitted for a granny, being sentimental.

Oh, and another couple of pictures of Zerlina 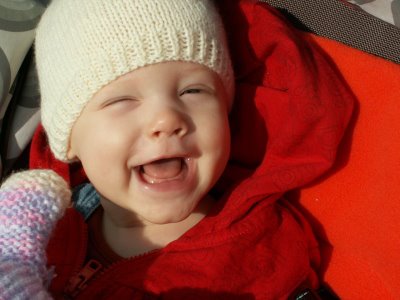 Her more usual expression. No teeth yet, as you see.