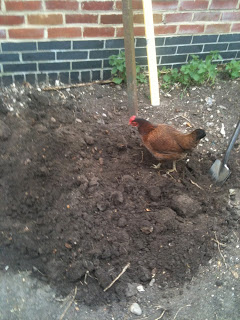 I was sure that you would want to see a picture of my favourite chicken.  She always follows any of us when she sees us going to work in the garden, expecting us to dig over the ground for her and, of course, one cannot disappoint.  She ignored a wireworm however, and I had to despatch it myself.  Maybe they taste bitter. I haven’t tried one.  Mind you, I’ve never eaten a worm, either, and have no plans to.

I was interested to see that they were making croquembouche on Masterchef this evening – and shocked to see Michel Roux blithely using a mould to shape it.  That wasn’t what it said in the Cordon Bleu book.  Very much the easy way out.  I gave myself the severest of burns when I first made croquembouche, when I was fourteen, by inadvertently dipping my finger in the caramel.  I admit that, since then, I’ve used a dab of cream as glue to help the caramel as it sets – but not a stainless steel mould like a witch’s hat!

It was interesting to observe myself, now that term is over and I have nothing to organise, that I actually went out with a notebook to discuss what is to happen in the garden and on what timescale.  The Sage, I’m sure, sometimes thinks I spend too much time on other things – but he had a brief taste of me concentrating on what goes on here, and I suspect he’ll encourage my outside interests in future.  I actually did a job today (a written one on the computer) that I’ve been meaning to do for some time, unasked for but that will be beneficial for all concerned, that has seemed far too much bother for the last six months.  I evidently have rested quite enough and need something to do.