I think I’ll wait for a bit before moving onto another alphabet. I’ve enjoyed it, but sometimes the posts are written around the titles. For the moment, I’ll show you a few more photos. They are all fairly random snaps and, as you can see, I’m no photographer.

We hired a car for three days. Wink and the Bod had seen a fair bit of the Algarve last year, but they wanted to fill in the gaps and also show me some of the scenery. So, on the Tuesday, we took a taxi up the hill to the car hire place (they considered walking it, but when they realised how far and how uphill it was, they were glad they hadn’t. I wouldn’t have tried in any case; they’d have returned to the hotel for me) and fetched it. I read while they filled in forms and sorted everything out. I had not taken on any responsibilities for any organisation of this holiday and was enjoying complete relaxation.

Bod drove, which he found a bit difficult. Actually, I’ve only ever driven my own car on the Continent – I’d have thought it would be easier to drive a left-hand drive car on the right, but I hadn’t considered changing gear with my right hand which I think would be very awkward. Bod certainly found it so, especially as we headed for the mountains and he had to negotiate hill starts at junctions as well. I quietly decided, if I hire a car abroad, to choose an automatic – but then I’ve often driven one, which the Bod never has. Anyway, we climbed to the highest part of the Algarve, which turned out to be a bit disappointing. There were masts and industrial buildings and nothing else and it was jolly windy, so we drove back down the hill a bit and stopped for a picnic.

The view was lovely. There were a few small farms but few other buildings in sight. 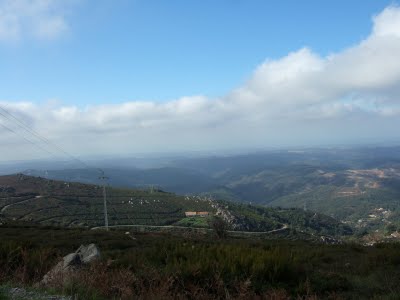 We heard bells before we saw the cows wander over the road. 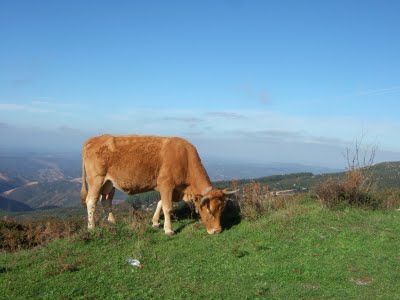 Afterwards, we headed over a mountain pass. 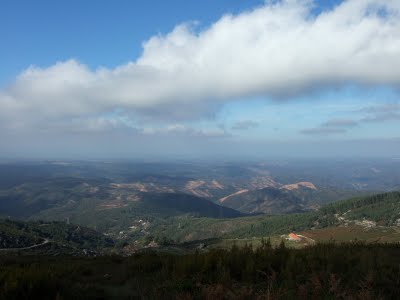 I didn’t have a chance to take photos because the roads wound so and we couldn’t stop, but there were a lot of cork oak trees and olive trees. I find the plants, and especially the crops, extremely interesting when I visit a place. I like to know what local people live on and what makes a place tick.

The area close to the coast is very built-up, and I didn’t take photos of the numerous apartment blocks and ex-pats’ villas, but once you’re slightly inland, it completely changes and there’s little sign of tourist activity. 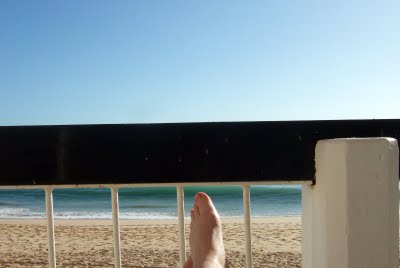