Zerlina is now seven, Weeza and Phil have been married ten years and Augustus is four – and due to start school in a couple of weeks, poor little scrump.  Full-time school does seem tough at his age.

The women of the family met for a jolly yesterday and went to see Annie at the theatre in Norwich, and very good it was.  Annie herself was particularly impressive.  I couldn’t help wondering about the acting bug, as far as the chorus was concerned – dancing set pieces in gaudy costumes doesn’t really seem like a job for a grown person.  But then the urge to perform missed me out entirely.  Before the theatre, I took Weeza, Phil and Zerlina out for sushi – z hadn’t been before and we weren’t sure how she’d like the food, but we thought she’d enjoy the dishes going round on the conveyor belt.  She was rather iffy about the first few things she tried but, fortunately, she loved the deep fried prawn dish and never looked back after that.  She also enjoys using chopsticks, so that was all right.

I babysat last night so that Weeza and Phil could go out and was glad to be away from home this morning.  Even so, it was very difficult – hard as I try to ignore anniversaries, it was impossible not to track in my mind the events of the morning a year ago.  I went up to Russell at 11 o’clock and, by ten past, he had died as I held him.  It is good that it is also Gus’s birthday and so that will be what marks the day, as time goes by.

I’ve had many kind and thoughtful messages, flowers and phone calls.  I was going to buy flowers on the way home, but changed my mind and picked them from the garden instead, for Russell’s grave.

Yesterday morning, the mother barn cat, who has been getting more and more affectionate, ventured to the porch door. 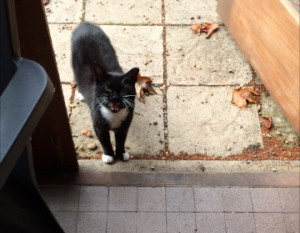 She certainly has her sights on being an indoor cat, at least on her terms. However, Eloise cat was decidedly unimpressed when she saw her and chased her away – the black cat didn’t go far, however and, if anything, is rather feistier than Eloise herself.  Neither is prepared to give in and both reckons the garden is her own territory.  Unless or until they make friends – or reach a truce at least – I am discouraging the outdoor cat, not speaking to her or petting her within 20 yards or so of the house.  They have to tolerate each other, Eloise be recognised as boss cat or the little cat has to keep her distance, otherwise a new home will have to be found. I’m not having Eloise upset.  I know that cats are very persistent and determined, but so am I.

At least I found the flea treatment and it has been applied to the back of Eloise’s neck.  She didn’t much enjoy the experience, but was very good when I held her firmly and didn’t wriggle. I gave her some cat treats afterwards, not something she gets often.

Tomorrow, young Benje dog is coming to stay for a week.  That’ll keep the barn cats away!  Won’t thrill Eloise either, I’m afraid, I’ll have to make sure she always has a refuge.  It’ll be all right, she can get into my study through a hatchway in the kitchen and I’ll keep the door shut.  She likes it there, there’s a south-facing windowsill and comfortable armchairs.

6 comments on “Z glances back”