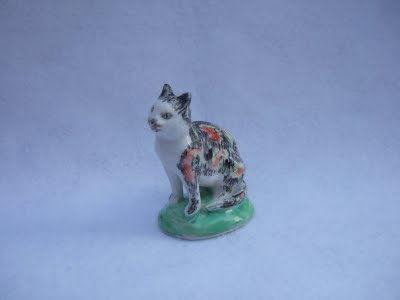 I thought you might like a picture of a cat. After all, most readers go all gooey at the sight of a cat photo and, although Dave doesn’t, Dave is not here.

Lowestoft made various animal: dogs, cats, swans, cygnets and sheep but they are mostly, apart from some standing dogs, fairly clunky – though the swan and cygnet get away with it – but the cats are lovely. You can hold it in your hand and feel the bones – the modeller had spend a lot of time stroking the factory cats. They are all cast from the same mould, although the positioning and the base has some slight variation, and they come in various catty colours. This is probably the least realistic colouration – when I first saw it I was a bit hmm but it has grown on me. Nevertheless, we won’t be bidding. All the same, no representative collection of Lowestoft china is really complete without a cat.

I put in an extra afternoon at a music lesson today as the teacher was going to be away part of the time and it’s quite demanding for one teaching assistant or non-music teacher. I was flattered to find she thought I’d be useful and pleased that she felt able to ask. It went well – I stuck to the piano/keyboard as, although I’m reasonably okay with drums I have no idea of guitars, and the piano part was quite tricky for groups of pupils if none of them could read music. I persuaded a couple of lads to have a go who hadn’t wanted to (and the other teacher hadn’t succeeded) so I felt pretty good about it. They were both absolutely fine and got it right after a few minutes, so I hope they felt a sense of achievement too.

I wanted to go to the exhibition at the Tate tomorrow, so I looked up the route – the Tube was suggested but there’s a change at Euston and the escalators aren’t working between lines. That’s no good, I can’t do all those stairs without hobbling for the rest of the day, and it’s a bit of a walk at the other end anyway, and then the exhibition as well as another one I want to visit if there’s time. So I checked a different route. Reduced escalator service at Green Park. No wonder I hate the London Underground. I don’t get claustrophobic or twitchy about bombs, it’s all the bloody walking. I looked up buses instead, but the site was fed up with me by then and wouldn’t work. So, you know, I can’t be bothered. Obviously, it isn’t a good idea to go direct from Islington to Pimlico. I’ll go to the British Museum instead.