“Um”, I said, with a rare burst of lucidity, “have you got a gate for the wall?”  The Sage said he had, and where it is, leaning against the barn.  I had observed it.  “Is it the right width?”  “Should be, I’ve measured it.”  We went over to it and looked silently for a minute.  “Um,” said the Sage, who talks much as I do, “it’s not rabbit-proof, is it?”  It’s a very attractive wrought-iron gate, but a slender rabbit would have no difficulty getting through.  “We’ll have to put wire against it,” he resolved.

Rather dismayed as I was by this, I let it pass.  “It’ll need cleaning and painting, anyway.”  “There’s no rust,” he said over-optimistically.  “Um,” I replied – there’s a wealth of meaning in these two-lettered words, isn’t there? – and pointed out where there was, distinctly, rust.  It hasn’t eaten into the metal and it’s a very sturdy gate which will, with its weight, be the first test of the strength of the wall, but it would be silly to paint over it.

I can see I have a horrible job in front of me.  Wire-brushing and scrubbing an intricately-patterned gate, sealing it against rust and painting it.  I’ll have to do it.  Left to the Sage, he’ll cheerily put it in place, promising to do the job properly soon and it still won’t be done in five years’ time.

Still, I’m going to measure it first, to be sure it fits.

Last night I went to bed with a headache and woke with the same one.  I had meant to get up early and garden but, as I lay there feeling bleary, the Sage half-woke, put an arm round me and fell asleep again.  So I got up rather late and didn’t do the gardening until later in the day when it wasn’t so hot. 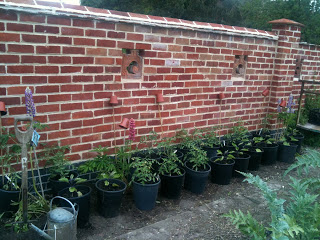 I’ve put some of the pots out, in the bit of bed that I’ve dug.  This is not how they will stay – it won’t be long before there’s more room when the next couple of sections have been completed, and I’ll give these a bit more space, put out peppers and some flowers and aim to make it a bit more attractive – though I probably will stick to the flexibility of keeping things in pots this year – and more weeding has been done in the rest of the veg garden.  This has knocked the artichokes about a bit, but they seem all right. 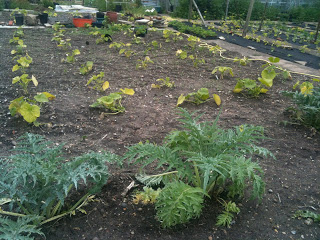 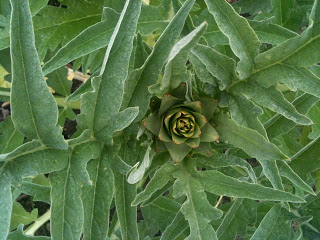 The plants all suffered somewhat from having been kept in pots for too long, but the hardy things had to wait until the fencing went up and the rest was delayed by the cold weather.  It’ll all recover and it can’t be helped anyway.  The headache went too, by the way.  I sensibly lounged about drinking water for a bit, as I think I’ve been overdoing things in the heat of the day.