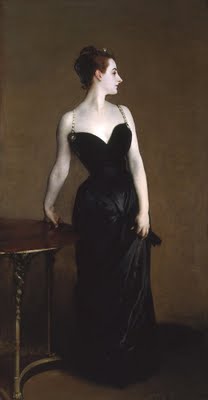 Briefly the reasons that this painting caused so much scandal to the reputations of both the artist and the sitter were the dress – evening dresses at the time were pretty low-cut, but this was more so than most, as it was cut to look as if she wasn’t wearing corsets. Indeed, she wasn’t, but the dress itself was heavily boned. Then there was her complexion. She valued her pale, almost luminescent skin and actually dusted her face and decolletage with rice flour, which gave her an almost lavender paleness. She also rouged the tips of her ears as a contrast! But ‘painting’ was not what respectable women did, not visibly so at any rate. Another thing that was daring was the lack of jewellery on show, for a rich Society lady. She wore none but her wedding ring and a gold ornament in her hair, which has recently been observed to be Diana’s (the Huntress) crescent.

It was a bold and provocative pose, and this would not have been so remarkable in an artist’s model – Manet’s considerably more explicit Olympia had been painted 20 years before – but this was a respectable married lady. But the clincher was something that, later, Sargent painted out of the picture. Her right shoulder strap was originally painted off her shoulder. Again, acceptable in a courtesan or model’s painting, but incredibly provocative, especially bearing in mind the sophisticated dress and haughty pose. Her reputation never recovered, both she and Sargent were horrified by the (to them) unexpected furore and he moved to England where, funnily enough, he was more kindly received and never put the painting on show again until after the lady died, when he sold it to an American museum (another version is in this country) with the proviso that, since she had been so upset and from respect, it should not bear her name but be labelled Madame X.