Tomorrow, the Sage is going to release the phantam. Here’s a picture of her – I put one of her up when she was a chick, which I’ll look for and link to if you like, although it was much like any other chick. 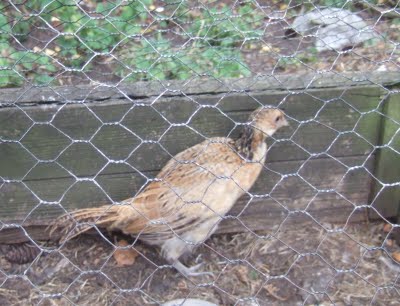 Not a good photo, but she was very frightened and was running back and forth along the further corner of her run. Her foster mother went back with the other bantams a while ago, because she was taking most of the food but she hasn’t become very tame, even with the Sage, and she’s anxious to get out. She does look much more like a young hen pheasant than a bantam, but she’s definitely a hybrid. We don’t think she’ll settle with her aunts and she’ll be best simply let go, and hope that she’ll come back to roost and feed to the extent she’s comfortable with. The cock pheasant has been keeping her company from outside the run already and, since she’s far too young to interest him as a mate, he evidently recognises her as a fellow pheasant.

The new village school opened today. Squiffany will be a pupil, but as one among those of the new reception year who will go part time to start with, she will start next week. It’s very exciting for everyone concerned; this school has been a twinkle in everyone’s eye for a long time. I really thought it would be built in my time as a governor, it having been considerably delayed by then, and I left three years ago.

I have to say, from the road at any rate, it is not an attractive building. An odd mix of different coloured bricks or wooden cladding in its various sections, it doesn’t look very welcoming as a school or very modern as a design. More a product of the 1970s, perhaps, which is no great compliment. I haven’t walked across the fields to see what it looks like from the other side, and at least the classrooms will look out onto playing fields and a farmer’s field. The pretty Victorian school building it replaces was far too small however, with a small playground and no playing field at all (the church has rented a playing field for them) and it’s wonderful to have been given the funding for this new school. Whatever it looks like from the outside, I’m absolutely sure – knowing the staff, governors, and children – that Squiffany will have a fine education and be very happy there.