I’ve never known a dog like Simon.  More character in his little claw than in the whole of any other dog.  But I’ll start at the beginning.

His owners took him as a puppy, but they couldn’t cope with him.  He chewed everything, he couldn’t be kept in, he was one jump ahead at every turn.  I think he was about 13 weeks old when he came to us.  I’m quite sure he was fully housetrained, he had more dignity than most people and wouldn’t deign to make a puddle.  He was black and tan, with some white, a thorough mongrel, it was impossible to pick out any breed for certain.  Oulton Broad Terrier, we called it.

He chewed, especially towels.  Most of our towels had a hole chewed out of its centre and patched, when I was a child.  Nothing was safe from him.  My parents had a four poster bed and he took refuge underneath and took anything he found there.  In later years, it was called ‘The Club’ because it was where the male dogs hung out.

He came to us in the Spring, which I know because we were going away for three weeks over the Easter holiday.  I suppose our gardener looked after him or maybe a friend moved in – I was only five, I didn’t know the arrangements.  I remember an incident that summer though, when he fell into the Broad (it’s where the river opens into a lake, Oulton Broad is the only Norfolk Broad in Suffolk and the part where we lived is probably the most formalised, with most of it surrounded by quay heading rather than riverbank).  Someone managed to haul him out and he was rushed up to the house, not before he had been quite sick with river water.  I remember seeing him lolling on the sofa, being fed brandy and milk from a spoon.  He lay on his back, a soppy smile on his face, drunk as a skunk, between Cobie our Dutch au pair and my mother.

We had a large garden, but it was impossible to keep him in it.  He was slim and slight and could find his way through the smallest space in a fence or hedge.  If there was no other option, he’d jump in the water and swim round to a neighbouring slipway.  You remember three-quarter lights in cars?  If you don’t, the front side windows used to be rectangular, and there was a small triangular window which opened out sideways.  It was very small.  One day, my mother drove our gardener into Lowestoft, with Simon in the back of the car.  They went to do their shopping and on their return the car was empty and the 3/4 light surround twisted.  Simon had squeezed out, we couldn’t work out how, and ruined the window while he was about it.  He turned up a few hours later, having spent the intervening time pleasuring a bitch or two, no doubt.  Because he was quite the randiest dog we ever knew.

And I’ll have to come back to Tales of Simon, because now we get on to an embarrassing tale – embarrassing to me, that is.  Or rather, we will in the next post, because that will be about Bess, the gun-shy gundog.

And here is his picture – 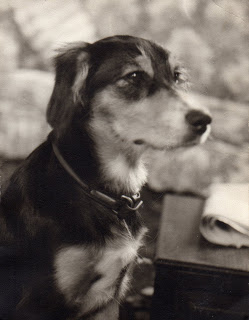