Huckleberry’s brother went to live next door.  He was a big, jolly dog with a rough coat and a boisterous manner, as unlike Huck as you could imagine in a brother.  His family was in the fishing business and yes, their surname was Catchpole.  We’re still friends with the family, by the way.

Kipper adored my mother and spent a lot of time at our place.  He spent a lot of time going all over the village too – I’m talking about the 1960s, it was not at all unusual for dogs to wander about freely.  In fact, when I’m in other countries I still often see dogs out and about on their own, although it is generally frowned upon here nowadays, certainly in towns.

He was very strong.  When I was a child, I used to take a sack out on to the lawn to sit on so that he could pull me about on it.  There’s a photo somewhere, though I haven’t come across it for years.  He was incredibly good-natured and let me sit on his back or play tug-of war with a bone – my hand, his mouth in case you were wondering.  Come to think of it, this was a game all the dogs enjoyed playing. One of us would try to take the bone and the dog holding it would clench his jaws and growl.  We’d end up eyeball to eyeball, both growling, each pulling as hard as we could until one of us let the grip slip.  However loud and fierce the growling, there was no anger or danger in it, it was a pretend fight and everyone knew it.  I was more dog than child, the main difference being that I spent my spare time reading.  And there’s the opposable thumbs, of course.

At our house, the dogs ruled, but it was a benign dictatorship.  My father generally managed to hold on to his place, but the rest of us usually ended up sitting on the floor while the dogs took over the sofas and armchairs.  If we did keep our place, it was with a dog sitting on us.  Kipper always sat on my mother’s lap.  He was, as I said, a big dog, labrador-sized, and there wasn’t much chance of her doing anything else while he was on her lap.

And here he is, bone in mouth, cuddled up to my mother – a typical Kipper pose. 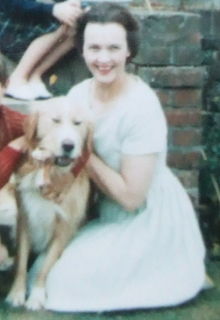