We’ve been working on the drive all day, but I’ll spare you pictures until something is completed.  At one point, when J and R were both breaking up rubble, I observed that they looked like members of a chain gang.  I’ve been feeling rather guilty about them doing that job ever since, although they look quite happy.  Jolly hard work though.

I tried again to load the video, but although Blogger doesn’t specify the largest possible size, it doesn’t load.    I could try doing it via Picasa I suppose, but I suspect that would take just as long.  I do put some pictures on Picasa, Flickr or Photobucket sometimes (don’t ask me why I have accounts on all, I can’t remember) but only if I want to share them with the family.  Otherwise, I don’t bother.  They take an age to load too.  Anyway, then I tried to edit the video and split it up but it played sideways on, can’t think why, and I couldn’t work out how to change it.  I could have gone through the tutorial, but how boring that would be.   Reading a manual is one thing but being taken through stuff on the screen is not for the impatient.  Pity though, as the sight of Al blithely brushing thousands of bees off a tree is quite a good one.

I did take pictures of the marsh marigolds/kingcups or whatever.  The first shows just how overgrown the pond is – very little actual pond left.  The second shows the leaves, but the sun was so bright that the flower was washed out so I took a third, you lucky people.  I do hope you like multiple pictures of the same yellow flower. 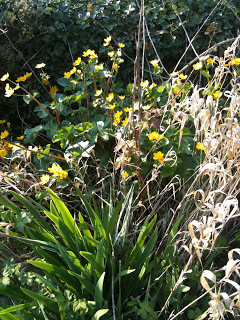 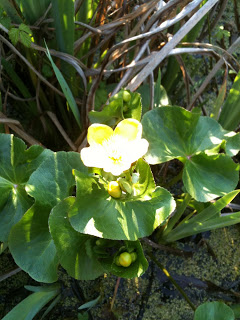 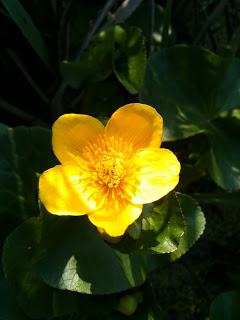