I’m feeling pleased with myself.  I have recruited a new governor.  She’s already a governor at another school (which will close in another year, when we’ll take on half its pupils) and I have been hoping to get her then, but I had half a chance and took it, and wrote to ask.  And she’s accepted.  She is brilliant and will fit in perfectly.  I also, yesterday, wrote inviting another person to join us, and that he hasn’t replied yet doesn’t put me off, it’s fine to take a few days to think about it.  He will also be ideal – I hardly know him myself, but he’s experienced as a governor, is a parent at the school and supportive, and the Head knows and gets on with him.

I set a lot of store by having a full governing body, with people whom I trust to get on with things.  When I left my last chairmanship I had got bums on all the seats, and I found someone to replace me when I left.  With my more boring eye on legality, I’m always the first to count up to make sure we’re quorate, and there are a lot of jobs to do and, the more people we have, the fewer there are for each of us.  I used to have three subject areas to monitor as well as being SEN governor and now I have one, music, which I do not want to relinquish anyway.

Oh, there was a chaffinch on the windowsill, peering in the window.  Lovely!

This afternoon, I heard a sound in the passageway, and knew who it was.  Black Granny.  She came in and waited while I fetched a slice of bread for her, which she pecked at on the carpet before pottering out again.  It’s more like the Beverley Hillbillies around here every day.  The Sage and I had a conversation this afternoon where we agreed that, sooner or later, we would both move upstairs and leave the downstairs to the bantams.  They obviously would like to move in. 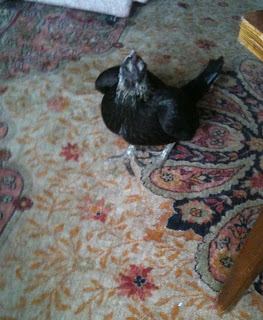 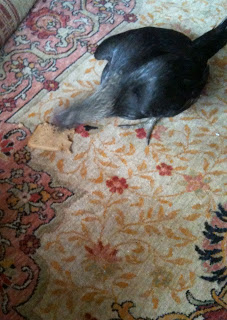 She was shaking the bread so hard that her neck is out of focus!