1 I have just finished the agenda for the next governors’ meeting, to go out tomorrow.  Also the agenda for Friday’s meeting, where I’ve blithely put down several items that I haven’t started to prepare yet.  Rather hoping my much more efficient vice-chairman will come to my rescue.

2 Huge backlog of Nadfas reports, which have come in over the last week and which I haven’t had time to look at.  Next mailing has to go out by Wednesday, so that’s all right, I’ve Tuesday morning and evening available.

3 Very entertaining watching Ben watching Crufts.  I read once that dogs can’t see the 2D images on television.  That is nonsense, as you’ll see from the photos below.  None of the dogs was making a sound, so he certainly saw them.

4 The field where the sheep are is flooded and they’re huddled in a small area, so they will be brought on to our front field tomorrow.  I’m looking forward to that.  I like sheep.

5 I’m going to a lecture about Burghley House and Hatfield House and the Cecil family tomorrow.  Before that, I’m going with the Sage to his doctor’s appointment, because he’ll not report back accurately – he always tells me everything is fine, even when it isn’t (he’s not ill, don’t worry, it’s the result of a blood test) and afterwards I have to pick up a piece of china, which will mean going through Norwich at the start of the rush hour.  So that’s 9-5 taken care of. 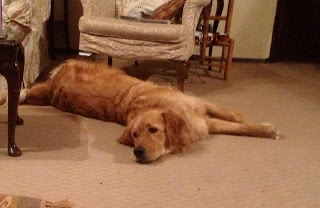 His interest was engaged 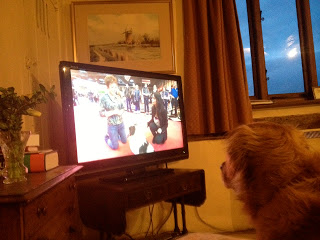 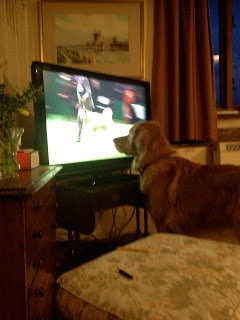 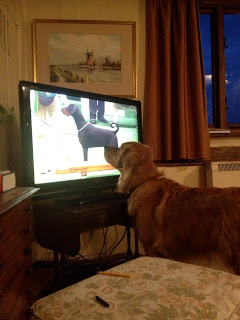