My mother asked me what I’d like especially of hers after she died.  I wasn’t going to be caught that way.  I said I couldn’t possibly think about it.  She tried several times to persuade me, but I refused.  Not too long afterwards, Wink and her husband came to stay.  After they’d gone home, she was a bit indignant.  Apparently, she’d asked the same question and they assumed she meant it and earnestly suggested a few items.  I pointed out that she had asked and said she’d meant it – but people don’t always mean what they say.

On another occasion, she asked what I thought each of the children would like as a memento.  Caught on the hop and hoping to please, I suggested that Weeza might like her (my mother’s) grandmother’s glove box.  “Oh.  I thought you’d want that.”  Impossible to get these things right.

Anyway, when she did die, no one wanted to think about that sort of thing.  Ro was newly at university, Weeza had a tiny flat, Al moved into her place anyway so was surrounded by quite a few of her possessions, and we packed a lot of stuff away.  Nearly nine years on, I’m finally dealing with them.  And so it was lovely that we were able to look on with a fresh eye.

The Sage, having done a lot of box-shifting (no turning out as yet) had found some things that he brought out to show.  “All these years that I’ve known him,” said Phil, “and he’s only just showing me his train set?”  At one point, while I was cooking, Weeza came to ask me for some methylated spirits.  I went straight to the cupboard under the back stairs and fetched it, which impressed everyone mightily with its unexpectedness.  This is what the Sage had found – 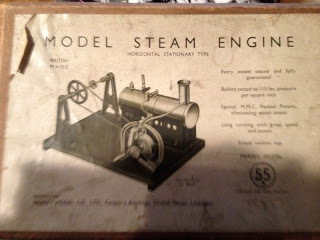 And here it is in action –