Well, there was enough snow for me to build a snowman.  A little one, admittedly, because I didn’t get around to it until the afternoon, by which time the sun had been shining and some of it had thawed.  If we get more snow, I’ll build a bigger one.

Al and the children built one too – Al being the smart one of the family, he managed to get arms to stay on. In fact, it was good building snow, sticking together well and not too powdery.

I’d quite forgotten, by the way, that I never wrote final “bringing on the wall” posts – if you read Dave’s blog, you’ll know that he and the Sage put in a couple of final sessions at the start of this month to finish it off.  They finished exactly four weeks ago and ended with a celebratory bonfire and fireworks, it also being Bonfire Night weekend.

My friend is still seriously ill and they hope to fly him back to hospital in this country in the next day or two.  He is in intensive care, but they have not been able to diagnose what the cause of the problem is yet.  Very worrying and we feel for his wife too, living in a hotel so far from home.  His daughters have flown out to be with them; one of them has a paraplegic husband and a young baby, but the husband has to have full-time carers so it’s not as difficult as leaving an invalid usually would be, in practical terms anyway.

You’ll want snowman photos, of course.  Here you are – it was a brighter afternoon than these show, but I took them on my phone, which is always a bit dark.  There are a couple of pictures of the wall too.  As you see, not much snow was left by 2 o’clock this afternoon.  But we can still hope! 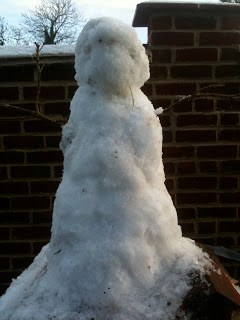 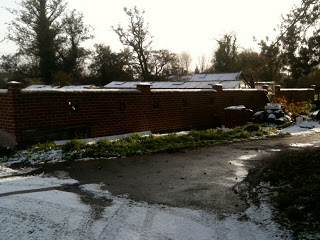 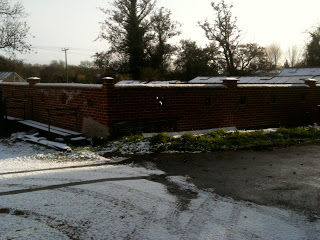 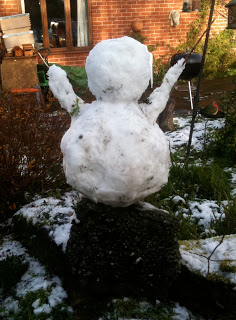 Oh, and congratulations to Simon (Eddie 2-Sox)’s son, Sam, on his success in the kuk sool won UK championships in Liverpool today.