The BBC website still says it was due to rain at 7 pm in Norwich.  We’re not far from there, but there has been none here, at any rate.  Heavy rain by 1 pm tomorrow, it says – we’ll see.  When the rain is coming from the West, it often peters out by the time it reaches this part of the country.  And it’s very localised – some villages get a lot more rain than others do, and this is one of the drier ones; which can be an advantage of course, sometimes.

I never write the words “get” or “a lot” without a pang, and wouldn’t ever write them in a formal letter or document.  Nor would I write “wouldn’t”, of course.  I doubt this sort of thing is ever taught nowadays, but  it was all considered bad English in my young day.  As was (I would not have got away with starting a sentence in that way, either) a word like “nice” unless used in its correct context, or adjectives such as “lovely” – not used more than occasionally, at any rate.

It is quite all right (alright was out.  Right out) to use all these colloquial terms here, however, because I deliberately write in the style I might chat to you with.  I do notice the poor English, but my rule is, if I would say it then I will write it here.  I also notice, but don’t correct, my verbal/written habits – the use of “actually”, for example and the slightly over-written, florid endearments.

I’m not sure if I am quite the same when speaking, although I suspect that, when some of you met me last week you will have felt that I speak just as I write.  As I said to some of you, my blog has shaped me to an extent and I am turning into my blog persona.  This is fair enough, as it’s one that I chose; and it’s based on me, after all.  I think I’m a little less Zeddish in real life, though.

The Sage was jolly sensible today.  He was up on a ladder clearing the gutters.  Not the whole house, but above this (one-storeyed) room, where three roofs drop rain on to one and sometimes we get rain in on the windowsill.  I had already been making cakes and so he was duly rewarded.  The family was in their garden next door, so I took them through and we all shared them, two each.  Dilly is tired, not surprisingly.  The baby will be born on the 26th of this month (if not before, of course) and she’s working right up to the day before.  I said, I was surprised she hadn’t booked the hospital for 4.30 on Friday so that she could fit in a full week’s work.  She plans to take the rest of the year off, but I’ll believe that when I see it.

As I was pottering back and forth in the kitchen this morning, I caught a sweet and heavy scent at intervals.  Eventually, I remembered the fresh lemons I’d bought last week from Tim.  Several still had stalks and leaves and one had flower buds.  The bud had opened and that was what I could smell.  I tried to put a picture on Facebook, but the connection is so slow here that it rarely works from the phone, but that’s the reason for the slightly odd picture, I only took one, but you can just see the flower. 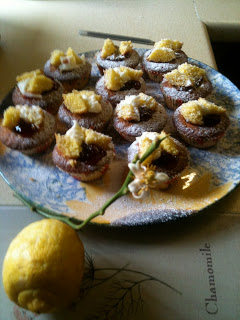