Well, a bit of it. We’ve all had a lovely day, the weather was perfect, hot and sunny but with a sufficient cool breeze for us not to feel overheated, and we decided on a route that would take us round several villages on quiet country roads, dropping at a very nice pub on the way back. I had various things to do this morning, including setting up our own church for visitors, and Weeza and Phil’s time is rather governed by Zerlina’s nap and feed times, so it was about 12.15 by the time we set out.

I was slowest from the start, and after about 3 miles I suggested that perhaps my bike tyres were a bit low. When we stopped at the next church, which was the delightful round-towered one at Little Plumstead, we decided to eat our picnic in the churchyard and Phil got his pump out and pumped up my bike’s tyres. When he came to the rear tyre, he said “hm, it reads 8 psi.” “What should it read?” I asked. “Between 50 and 60.” Afterwards, I felt every bump in the road but cycling was a whole lot easier. The church was unmanned and locked, with a friendly note of apology and squash and biscuits left out. I wrote a note of thanks for the lovely peanut biscuits.

We continued on our way. A few other churches were unmanned but open (you sign their sheet to show you’ve been there and write on your own sponsorship paper the place and time), and the people at the other churches were friendly and welcoming. We were plied with drinks and biscuits. The countryside was delightful. Zerlina was well-cushioned in her bike trailer and perfectly well-behaved, Phil was patient and showed no annoyance at Weeza’s and my slower progress and Weeza said several times what a lovely time she was having.

We stopped for beer and icecream at the splendid pub attached to the fine brewery at Woodbastwick, by which time I was aching rather. Just one more church to go and we headed for home, getting there at about quarter to five, just right for Zerlina’s tea.

We only visited 8 churches as they were mostly rather spread about (I started at my own village church so had 9 marked) and went nearly 19 miles, about 30 km. This isn’t much more than Phil cycles every day as the non-train part of his commute, but was a long way for Weeza and me. We visited Little Plumstead, Rackheath, Hemblington, South Walsham, which had 2 churches next door to each other, Ranworth, Salhouse and Woodbastwick, which are all villages north east of Norwich. Phil took photos and if he gets around to sending them to me, I’ll post some tomorrow.

We had fun and will certainly do it again.

He’s just sent the pictures of Zerlina – here’s one of her eating her biscuit (not the peanut one), with her foot in the air like she don’t care 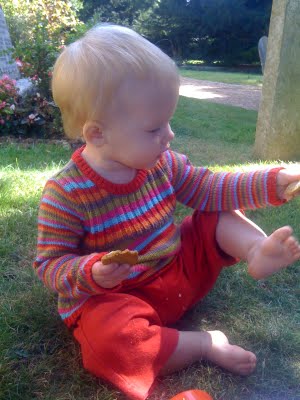