It’s 6 months today since my operation and quite some time – about 3 months, I think – since I specifically wrote about it.

It continued to improve, and I rarely think about it, except to marvel thankfully about the difference it’s made to me.  There is still a small difference in leg length, just one or two millimetres I would say and I’m barely conscious of it.  I’m only mentioning it at all for the sake of a detached evaluation.  I read that one should give it several months for adjustment – settling in, correcting a pelvic tilt, and so on.

Looking back, I can quite see that someone with severe arthritis in one hip and less severe in the other hip or knee would have the deterioration of the second joint accelerated by the first operation.  I had a degree of discomfort in my left hip on occasion and it hadn’t shown any sign of arthritis in the x-ray I had last September.

Once I was back to normal movement, driving and everything, I found that standing still after exercise gave me some problems and made me limp, but that was temporary and doesn’t happen at all any more.  I can now wear any shoes I like – 3 inch wedge heels today, and I’ve stood and walked quite a lot.  I can also wear completely flat shoes.  I had reached the stage of only wearing heels of 1″ to 1 1/2″ as that was the only comfortable height.

I am occasionally aware of the implant – well, not the implant as such, but the join.  I can feel a sensation that one could almost call discomfort.  Hard to put into words … if you have a bruise that’s nearly healed, but when you press it there is a slight reminder of it.  Like that.  I’m aware of it now in fact.  It doesn’t ache or hurt, it’s just that I can feel where the top of my femur was cut off.  Never the pelvis, I’ve never felt that, although it’s titanium and has a screw in it.  It seems remarkable to me that there has been so little pain, considering all that was done.

The scar is very neat and just a pale line.  If rubbed, it still feels a mixture of tingling and numb.  It’s not swollen at all any more.

As for movement, I can do anything I want to, pretty well.  I haven’t tried kicking the light on, but can comfortably put my foot – either foot – on the kitchen counter.  I have short legs so this isn’t bad at all.  Before the operation, it was my left leg that could hardly lift at all, which seems odd as it was my right hip that was bad.  I can run and jump, but don’t much, as that sort of jarring isn’t good for it long-term.  If I’d wanted that, I could have had a different implant.

When I was waiting for the operation, I considered what I’d take as a success – the bottom line, that is.  I decided that the criterion for success would be to walk without being aware of every step.  Taking being able to walk without discomfort or pain for granted, to the extent of forgetting about it.  I was aware that it was a slightly pathetic want, as it’s something that one does normally take completely for granted, but I find it kinder to myself to not hope for too much – that is, not be disappointed if there were any residual problems as long as there was an acceptable improvement.   Since I’m way better than that, I reckon it to be close to a total success.

If you’ve read this far, here’s your reward – Zerlina in cool sunglasses. 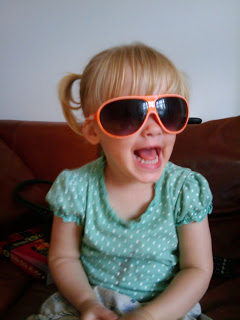