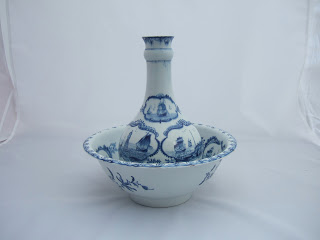 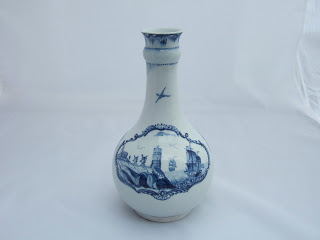 I should have trimmed the photos, sorry.  I forgot that these were the originals.  But don’t look at the background, which is the interior of the light-box, hey.

The Sage got the price he hoped for, which was £34,500.  Everyone who viewed the sale looked at and admired them, and they have been bought by a collector for their own collection.  Since they have been in the same family since 1948 when they were last sold (for £80), it’s rather good to know that they will still be handled and looked at closely, not put in a museum to be admired but not loved.

So, the sale went well but I’m too tired to think.  I’ll balance the books tomorrow, right now I’m going to bed.

Two of the paintings depict Lowestoft’s lighthouses.  The one on the cliff was the High light, the one on the beach was the Low light.  These are real scenes from the period and at least one of the ships can be named, as can the church.