The Sage and I spent some time missing each other’s phone calls last night, and I found another slightly edgily affectionate message again this afternoon.  I phoned his mobile, which wasn’t answered, and then tried Wink’s number and, sure enough, the Sage picked up.  So we billed and cooed for a while, I explained why I hadn’t been about when he rang and he explained that he hadn’t meant to leave his phone in his Gladstone bag where he couldn’t hear it, and we agreed that we miss each other awfully.

Actually, mostly, we talked about the bantams – fortunately, he approved of how I’ve been looking after them.  And I have, I’ve taken ever so much trouble, giving them soaked bread in the morning, corn at lunchtime and leftovers of more bread, salad and pasta from last night, with a bit more corn, this evening.  They have looked very well, though the old black hen was very noisy yesterday and the only way to stop her was to feed her – she’s greedy and chases away any other girl who comes to eat, even though there’s plenty for everyone.

We went and had lunch with Al and Dilly and afterwards Weeza and I came back here to put Zerlina down for her nap.  The phone rang and it was the son of our friend Daphne, who is staying with his girlfriend in Southwold for a long weekend and wondered if it would be convenient to call in during the afternoon.  Indeed it was, we haven’t seen him for years.  He’s a couple of years, nearly, younger than Al, and we all have spent a lot of time together, on and off.  His father died when he was in his mid teens, he referred to him several times – not in a particularly reverent way but it showed the influence still there, half a lifetime later.

This evening, I looked at the random collection of food I’d got – a cauliflower, a few new potatoes, some tomatoes, onions, shallots and garlic, a red and a green chilli, a few slightly wizened young carrots and some broad beans, and two large open-cup mushrooms.  I put away the cauli and potatoes until tomorrow, and the green chilli and cooked the rest with an assortment of spices.  It was fine.  Slightly unusual.  You’d not call it a recipe, mostly a matter of getting out everything beginning with c, plus some mustard seed.

Don’t you love the way mustard seeds pop when you fry them?

Anyway, I thought you might like a couple of happy family photos.  The first is of Squiffany and Zerlina doing some drawing together and the second of Zerlina and Tilly having a cuddle.  Tilly has had such a happy time this weekend, she loves the children. 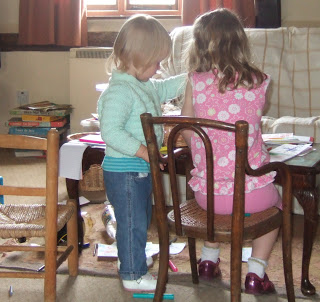 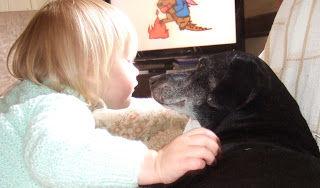