I was such a fool, not only to make a plan but to put it in writing.  Of course it didn’t work out.

It was 12.50 am and the Sage and I were peacefully slumbering when I was woken by a noise on the roof.  When something falls down the chimney, it’s usually a pigeon, but it wasn’t that this time, so I could only think it was a squirrel.

Funnily enough, last week I had a conversation about such events with Wink and some others, about the problems of bats in the house, squirrels down the chimney, various creatures making their way in and causing havoc.  And I said a squirrel wasn’t likely to get into our house by the chimney route as the pot is 6 foot tall.  Oh, bitter irony, I thought, in the small hours, as the animal bashed about trying to get through the board that blocks the fireplace.  It settled down later however, and I went back to sleep for an hour until it tried again.  There was also a bleeping sound, which was probably something with a running-down battery (I haven’t found that yet, must look again).  So I decided to sleep in the next room and crept out, the Sage still being asleep.  However, he’d shut the door on that room in the hope I wouldn’t notice that he’d put a whole lot of Stuff in there (I was well aware, obv) and, as that door is slightly warped, opening it is a bit noisy.  I may well have woken him, I’m afraid.

I put my book, iPad and iPhone under the pillow (these are necessary, they’re my security blankets) and had quite a good night’s sleep after that, but I didn’t get up very early.  And then, having got a towel and a pair of gloves, we opened the windows and shut the door and cautiously took the board from the fireplace.  No squirrel.  Instead, a barn owl, which immediately took refuge up the chimney.

The Sage suggested leaving the fireplace and windows open, but I’ve been caught that way before, because there’s no way of knowing if the bird has left or not, so we balanced the board back and agreed to have another go later. And later, he went out and Dilly and Hay came round for a chat and it wasn’t until they left that I realised that Elle, who had a free period first thing, should have been downstairs for breakfast by then and I went up – but I glanced in the bedroom and there was the owl on the windowsill.  When it saw me, it flew to the other window, thwacked into the glass and lay stunned.  Anxiously, I went across and picked it up.  Darlings, you know how beautiful a barn owl is and I feel quite lucky to have held one.  And it was all right, thank goodness, though a minute later it shot its back legs out, intending to fly away (but I was holding it securely) and the claws went through my jumper, into my shoulder and one curved claw got caught.  It was so curved that I couldn’t extricate it so went down in search of Dilly for some help.

It weighed remarkably little, far less than a pigeon although it was larger.  Incredibly soft feathers.  That chimney is never used and isn’t sooty at all, thank goodness, so no mess.

It was all right, it had disentangled itself by the time I got outside, I put it on the table and it flew (or flue, as Rog put it) strongly away.  And Elle’s alarm hadn’t gone off, so I woke her and she had to hurry, but still had time for breakfast.  And I’ve done Meals on Wheels and the first letter of all the work I have otherwise still to do.

Later, possibly, depending on what’s happening around here, I hope to come back and tell you about my holiday. 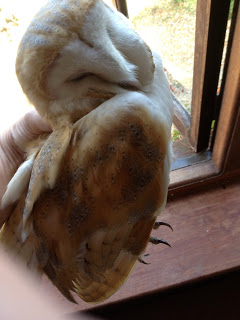 What an oddly wrinkled thumb I seem to have. 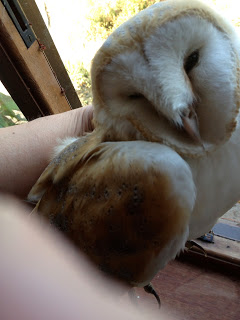 It didn’t try to peck, which was quite a relief.  I’d rather handle an owl than a squirrel, though I suspect I’d come off worse against an aggressive owl. 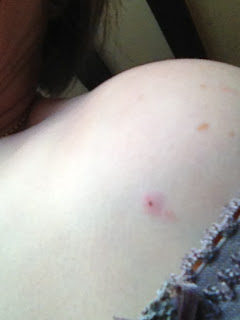