It’s been a good day, you’ll be pleased to learn, especially if you follow me on Facebook where, I’m embarrassed to note, I mostly report what I’m eating and drinking and when I’m not sleeping, but have kept perfectly quiet today.

My usual Friday meeting with the school Head, but after that I was on holiday, and the holiday feeling kicked in about 12.30.  It was helped by having slept marvellously last night – I listened to the final episode of Rogue Male and started on the first of Dead Souls, but fell asleep, woke, turned off the iPlayer app and slept until 7.30.  And, with tension draining away, I suggested taking R out for lunch.  We went to the little café at the garden centre, where R had soup and I had bacon sandwich, then I went to buy birthday cards for my children.  Ooh, hang on, I was going to scan one onto the computer…. look isn’t it divine? (click to enlarge, as they say) 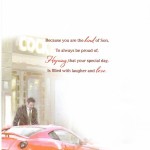 *sighs with delight*
Right. You might just be thinking that I’m talking through my hat. However, you should know more about us and our ‘sense of humour.’  Years ago, when Weeza and Al were in their teens, she gave him the cheesiest card she could find, with teenagers in ’70s garb on the front (circa 1990) and the heading ‘My brother, my friend’.  And that set the tone for much of their exchanges of greetings.  But this offering might just trump hers.  Not only are there four verses of doggerel, the word ‘Special’ on the front, random italics and a third verse that neither rhymes nor scans, but it also has an egregious spelling typo and poor grammar.  I think I’ve set a new standard of cheese.

Eloise’s card is merely kitsch, it doesn’t come close, but it does have annoyingly scatteringly glitter, so I think she’ll appreciate it.

Anyway, her present is not wrap-up-able, so I went and bought her two planters and various herbs to go in them, and they are duly planted and are in the greenhouse waiting until tomorrow.

This evening, we went over to Halesworth and looked at the auction coming up tomorrow.  They are really nice people and R has got to know them quite well, and it was good.  A lovely little Lowestoft miniature sparrowbeak jug, really covetable.  And I was quite drawn to a mahogany bed, but I suppose that would be silly.  I miss the lovely half-tester we used to have in our Edwardian house when we lived in Lowestoft, and couldn’t bring here because the ceiling was too low.

After that, we went round the corner to an exhibition of Harry Becker drawings, which we like very much.  And then came home for omelettes.

I have written a few school emails tonight, but only friendly, non-business ones.  I’ve got a bit of work to do on Monday and Tuesday, but then am shutting down on schoolwork for a bit.  It’s been a hard term and having sleepless nights because of a voluntary job is absurd.  I’ll bounce back,  I always do.