Pam and Peter’s house is in a village on the western side of the island.  They decided on a house in a residential area rather than a seaside villa so that their neighbours would be Greek people rather than visitors or ex-pats as they wanted to become part of the community for the months that they live there – in fact, they come and go to England frequently but are there regularly during the summer.  The living room, two bedrooms and the kitchen are upstairs and there are two more bedrooms and a dining room downstairs, but we ate at the table in the kitchen rather than trot up and down the stairs with our food. 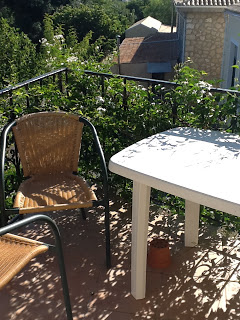 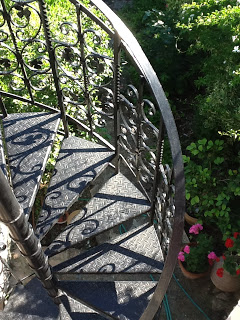 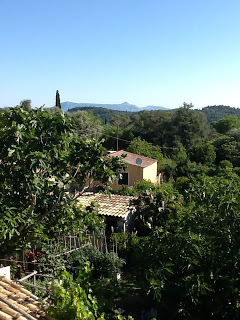 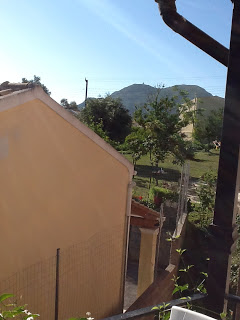 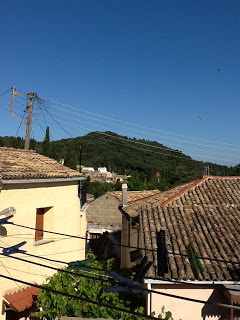 Views from the balcony.  The jasmine is cut back when they leave in October but had already grown up and over the railings. 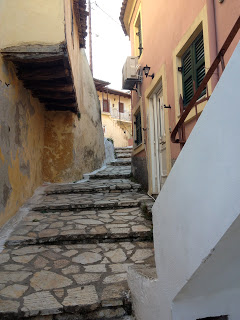 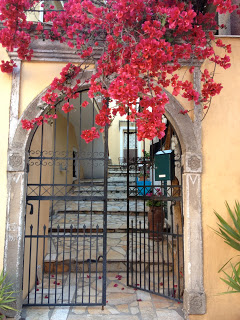 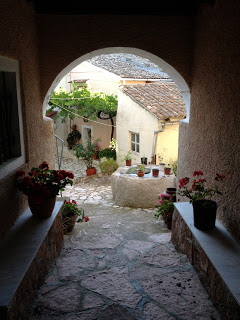 Snapshots of their village.  Pam and Peter had pet dogs for many years until they started travelling so much, but in the past few years Pam has twice been bitten by dogs (never out of England, no fear of rabies) and is now wary of strange ones, so I appointed myself as protector when one was in the way.  This one was charming, moved politely aside when we wanted to pass and then lay down again when Pam and Peter had gone past.

A few days previously, we had taken their friend Julie out to dinner.  She lives half the year on Corfu and has a delightful house in a village in the north west of the island.  Her neighbours have a yappy little dog, not much more than a puppy, which Julie is quite wary of – one of those little terriers that looks as if it might bite, though I don’t think it ever has.  When we left her house for the restaurant, it was in the lane.  Protector Z looked at it.  I put on my Look.  It scooted straight into its house and turned and peeped at me.  We walked past, but it occurred to me that it might scuttle out again and attack from behind.  So I turned and it was just coming out.  I Looked.  It vanished.  Hah.  Actually, it was probably sweet and if I’d been there longer I might have tried to make friends with it instead, but in the circumstances it was simpler to just get it out of the way.  It was another reminder of the film Labyrinth actually, it looked very like the feisty little terrier that guarded the bridge. 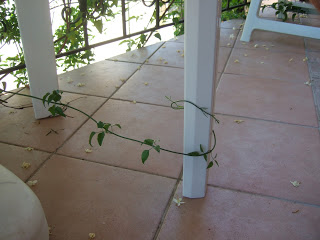 The table was put out on the balcony the day we arrived and a week later the jasmine had grown around it. 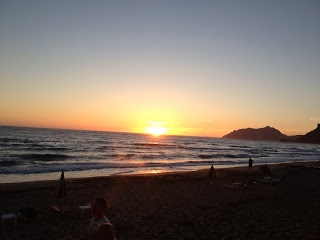