I’ve been taking it easy today.  I didn’t altogether take the day off, I’ve got a fair bit done, but I read both daily papers by mid-afternoon, which doesn’t often happen with the bulky Saturday papers.  I spent quite some time finding out more about my iPad, which I bought last Monday in a hopeful burst of exuberance.  It has already proved very useful at meetings, where I haven’t had to take along papers, but just read documents from the screen.

I mentioned, the other day, that I’d had to carry the brown hen out of the porch, when she wanted to sit on eggs and I needed to go out.  We had to give in, she was determinedly broody.  Fortunately, the Sage’s friend Graham, who is leaving for New Zealand tonight, brought 15 fertile bantam eggs as a parting gift, so they have been divided between the broody ones, three or four each, and we will raise a cockerel to join the family as well as some young hens.  We always bring in an unrelated potential father, not wanting ours to become inbred.

It’s typical of this girl that she has neither hidden away nor sat in the hen house, but has come as close as she can to us.  She is unperturbed by comings and goings, but still sharply aware of what is going on.  I heard some squawking this morning, which was probably two of them having a brief altercation, and went out to find her craning her neck, trying to see what was happening without leaving her eggs.  The eggs she had laid were, of course, infertile, so I reached under her yesterday, taking them all away and then replaced them with four of those that Graham brought. 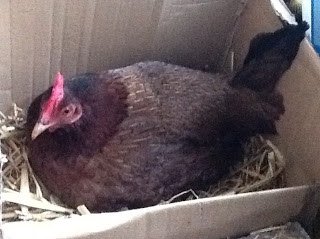 When the eggs hatch, we will put each foster mum and her chicks in a separate coop.  It’s too risky to leave them outside, the magpies would get them.