Can I say, cautiously, that this seems to have been a good day?  I’m not at all sure why because it’s not been that eventful, but I slept for hours at a time last night so that’s probably it, because it’s been a bit dull in many ways – paperwork related, darlings, need I say more?

As an example of dullness, I took a couple of photos of where the greenhouse no longer is and of what it’s reduced to. 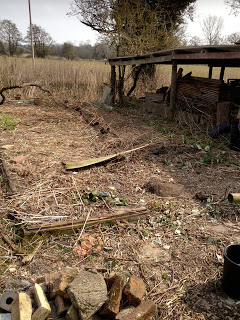 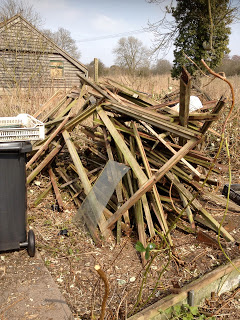 The snaky branch near the top of the first photo is a grape vine.  The chickens can eat the unripe grapes this autumn, I can’t bring myself to destroy it yet.  I’m not good at the slashing and burning thing, I construct rather than destroy by preference … ooh, at last an idea for a post, I knew one would happen if I waffled long enough.

I was having a conversation a few weeks ago with a couple of friends and, I’m afraid, we were rather pulling to pieces another person.  It was agreed that both of them are creative/artistic types, but that she is ultimately destructive.  She’s one of those persons who, if she breaks a cup, she’ll say to her (innocently on the other side of the room) husband, “Look what you made me do!”  Everything has to be someone’s fault, yet it’s never her own.  In the garden, which is large and would look lovely informal, everything is ruthlessly cropped into shape.  It’s not that straight lines rule, she does have an eye for beauty, but that it all has to be relentlessly tidy – we concluded (oh dear, three women and a bottle of wine) that it’s the cutting back and destruction of the clippings that attracts her most.

Me?  No, I’m not creative.  Not an artistic bone in my body.  It was agreed that I’m constructive and, as a practical Z, I was quite happy to go along with that.  But let’s face it, you’re nicer to the people you’re with than those you’re talking about, so I may have been unduly flattered.