Although I had to stand still and pant several times and I certainly couldn’t walk uphill and talk, at least the unaccustomed uphill exercise last week gave my lungs sufficient workout that I could play the clarinet con brio this morning – sight-reading as well, I hadn’t got around to practising – having hardly touched it for nearly two months.

This afternoon, mate with chainsaw arrived and first took down the apple boughs that were leaning on the roof of the outbuildings, then went to tackle the oak while I wheelbarrowed the logs round to the front porch.  The tree having been dead for a while, we can use them this winter.

The next three hours were spent cutting, barrowing and stacking.  Mate with chainsaw reckons the best part of two tons of wood are contained in that branch.  He cut up the smaller boughs and I stacked them against a wall. 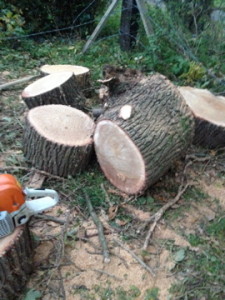 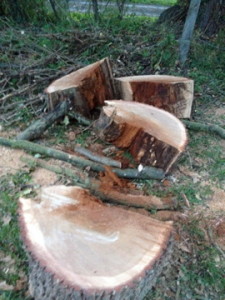 I will have to think of somewhere else to put the rest of the logs, once the big pieces have been split – see the rot in the last picture, you can see where the weakness lay – but the small ones can dry out over the next couple of years.  We still have plenty of wood for now.

The obscure title of the post results from a discovery I made this afternoon, though apparently it’s well known to country folks: that is, cows love to eat oak leaves.  I took a number of the end branches over the drive to them and learned a certain amount of Cow as I did so – I was returning with the empty barrow, having taken a load of logs, and Scarlet gave an excited little moo that certainly said “Look! She’s coming back!”  I took them some more leaves and a few minutes later, still loading wood, a peremptory moo gave sharp instruction that those had been eaten and they were ready for more, and maybe I’d jump to it as they were waiting.  I tried eating a leaf myself, but I have to admit that I can’t quite see the attraction.  It didn’t seem that much more tasty than plain grass. 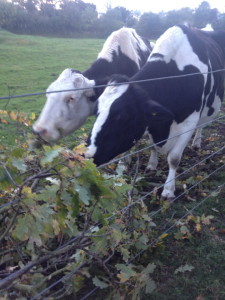