There was excitement as I was nearing the last brick, and Weeza got out her camera and the Sage hopped up on the scaffolding next to me.  I was agitated.  I wanted to concentrate on getting it right, and it wasn’t right.  In every section, we’ve worked on the pillars first and then joined up in between and it’s worked out fine, with level brickwork, but this time it wasn’t.  The Sage took the spirit level from me and held it – “no, it’s okay, look.”  I pointed out that he was holding the right end of the spirit level above the height of the bricks.  It wouldn’t do.

I consulted Dave, who agreed, and I asked him to knock out three bricks so that I could put it right.

So, a few minutes later, I was all ready to smile as I laid the last brick.  Weeza took photos – these were the first ones I’d been in, as I’d always been the one with the camera until then.  I finished the pointing and then went and made a cake.  I felt that the occasion deserved some recognition.

Dave, in the meantime, was carrying on with the tiles.  There had been some debate about the relative merits of finishing one side completely or doing some tiles all the way along, and in the end it was decided to do the latter, as that would be more weatherproof if the weather turns against us and this is as far as we get until the spring.

And here are photos.  Including of Z and the Sage, rarely seen together.  Blogger seems to have messed up photo loading again, having been briefly useful, and it’s all taking so long that I can’t face reordering them, but I daresay you’ll work out the correct order quite quickly.  Zerlina is seen holding the section of mortar that Dave knocked out – it was only laid yesterday, so wasn’t hard to remove. Although in any case it is, correctly, less hard than the bricks. 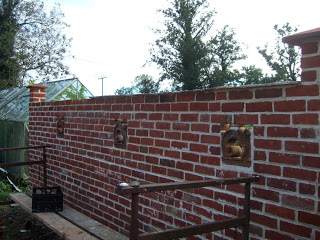 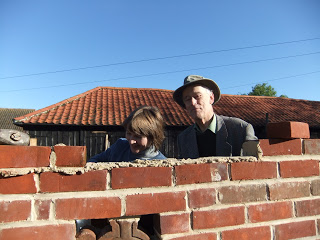 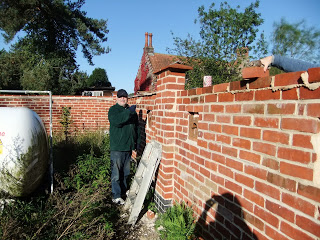 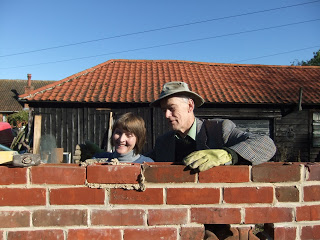 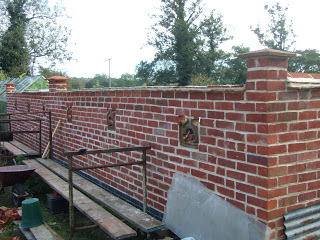 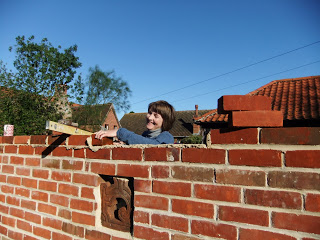 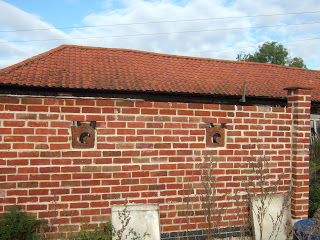 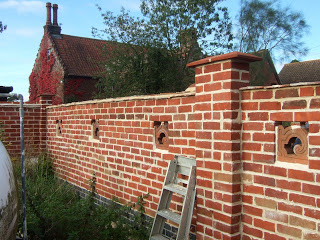 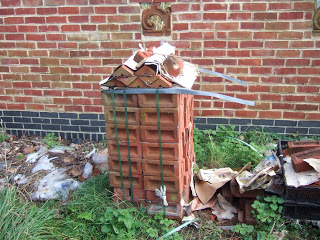 Finally (I hope) there is a picture of the unused bricks.  There’s about 100 of them.  I don’t think there’s quite enough to do another course of bricks which is just as well, because Dave would insist on taking off the capping and adding another row underneath.  Instead, we’re thinking that our potting shed could be half-bricked.  After all, we’ll all be at a loose end next year.