You know I said that the vet says Tilly’s teeth aren’t in good shape?  They feel pretty sharp when your fingers are caught in between them.  She really doesn’t like those tablets and, most unusually for a polite and gentle little dog, clamped her mouth shut when trying to avoid swallowing them.  Unfortunately, my hand was in the way.  Still, no harm done, and now I know better than to do them one by one.  I open her mouth with one hand and, with the other, shove all pills to the back of her throat until she swallows.  Kinder, as that way she doesn’t get the taste. 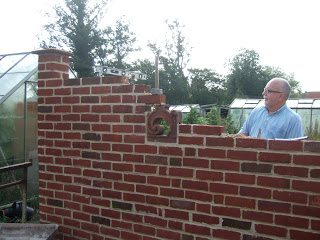 Dave started by building the end pillar to the top, and then carried on for another few rows, just to get the sense of a job done – now all we have to do is fill in between.  The final tiles and capping bricks will have to go on right at the end of the job, but the pillar is complete.

In the meantime, I was working on the central pillar, up to where the next ornamental brick will go.  They are four ordinary bricks high, so that’s as high as I went. 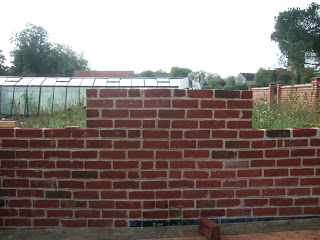 After that, we both did some filling in.  The forecast is good, so we’re planning another session tomorrow morning. 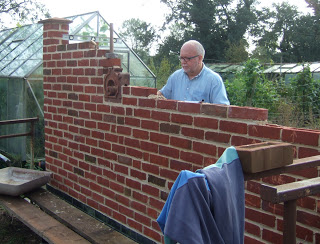 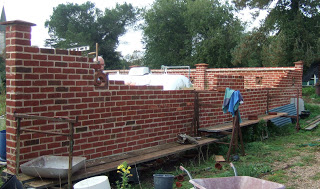 Weeza and Zerlina came over for the day.  As the weather was so lovely, we spent most of it outdoors.  In the afternoon, we did more work on the fallen oak tree – more than half gone now, but it’s a big job.  When Squiffany and Pugsley got home from school, Al took the children to pick some blackberries and the girls came back with berry-stained faces and hands. 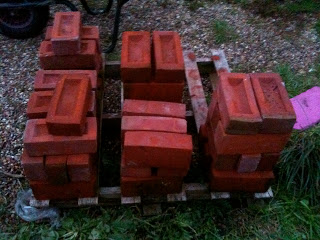 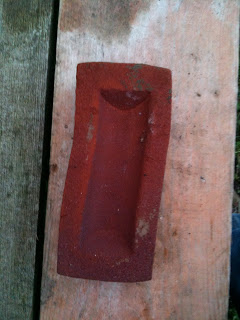 After that, the Sage and I fetched bricks for tomorrow, opening the last pallet.  It was 6.30 when I took this photo on my phone, so it’s rather dark. And here’s one of the bricks, so you can see why the wall isn’t quite as straight as it might be.