Our backs aren’t really to the wall, of course.  If we don’t get done this year, there’s always 2011.  And we still might get it completed, given a fair wind and a bit of mutual spare time.

I had the children this morning because their mother was working for a while.  It was the first time she’d tutored this particular boy and he looked very nervous.  People are often surprised when they see her – we think that they expect to see some sort of Victorian governess figure, and she’s young and pretty (she looks younger than she is, even) with a cheerful Norwich accent.  She admitted to him that she was nervous too – it’s always a bit nerve-wracking to go to someone for the first time, wondering if the work you’ve prepared hits the right spot.  In fact, she said, he’s a bright and willing boy, but can’t do mental arithmetic as quickly as his teacher requires, so is struggling a bit, so some one-to-one tuition should help, and she’ll teach him a few multiplication shortcuts.

Pugsley and Squiffany played with Lego and stuff for a while, then asked to watch my Horrid Henry DVD.  They sat together on my armchair and I put it on the computer.  I’d given them each a biscuit and they were perfectly content – Pugsley turned to Squiffany and gave her a kiss on the cheek.  He rarely kisses.  Boy-kisses are given only to his mother, sometimes.  Squiffany, surprised but pleased, kissed him back on the side of his head and then looked at me.  I did an open-mouthed, wide-open-eyed look and a thumbs-up and we grinned at each other, Pugsley not noticing.  I went back to my cooking.  I was making rock buns.

I haven’t made rock buns for probably 30 years, so getting the consistency right was guesswork.  Well, not entirely.  That is,  I knew when I’d got it slightly too wet, so added a bit more flour and decided that was probably all right.  I couldn’t find any mixed peel in the cupboard – it’ll be there somewhere, but probably rock’ard – so added 2 oz of sultanas and 2 oz of raisins instead, didn’t seem to have any mixed spice so used allspice and grated enthusiastic quantities of nutmeg.  While they were cooking, I mixed a Victoria sponge mix and put it in the Aga cake baker.  I usually use sandwich tins, so (instead of looking it up, sensibly), guessed the timing – and took it out too early.  It was bulging enthusiastically, but pallidly, at the top of the tin so I shoved it back, set the timer again and when I went back it was cooked with a deep dip in the middle.

Ho Kay.  I tipped it on to a cooling rack and, when it was done, cut a circle out of the centre, cut it in half across, sandwiched it with jam, put it back together and slapped cheery icing on the top.  It would be fine.

Dilly and I sampled the rock buns and approved.  I went to the church to play the organ for the funeral.

It all went a bit disorganised after the service.  I got back – oh actually, I’m wrong, it was then that I iced the cake because it wasn’t cool enough before.  Then Dave arrived, so I made me and the Sage sandwiches, Dave and me tea and we chatted while waiting for the Sage, who was still at the church talking to people.  As I said yesterday, Reggie, who had died, was a village man and so lots of long-time residents had come, people that the Sage has known all his life so it was quite understandable that he wanted to talk to them.

He arrived home in the end, ate his sandwiches and drank the tea I made him and then the phone rang – it all took a while but he ended up being interviewed live on the radio.  I’ll have a look and see if I can find it for you – Dave and I tried to listen but couldn’t get it either on my phone or his car radio. 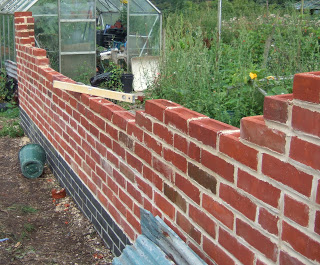 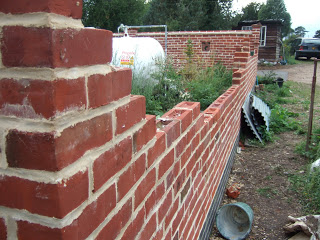 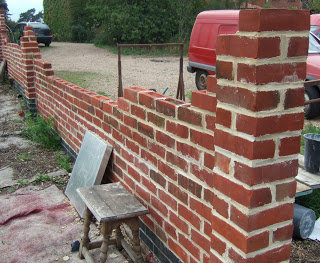 It was more than an hour after Dave arrived when we finally started work, but we got a good amount done.  And here are the pictures.

Next time, we’ll have to start on the ornamental bricks.  Well, Dave will.  They’re a bit tricky.

I couldn’t get a very good angle for the pictures I’m afraid, but at least this shows how fabulously accurate our straight lines are, hem hem.

You will observe that I’ve given up weeding the pumpkin/squash beds.  There was little weeding to be done when I left here, nearly a fortnight ago, but it’s rained a lot since.  It isn’t going to happen now, I’m afraid.  If I get around to it, I’ll cut flower heads off before they seed, but that’s the best I can offer.

As you see, we’re mostly at the level of the ornamental bricks – those in the final section will be a couple of courses lower than the rest as the ground drops away – we should have enough bricks for that, we think.  We’ve got seven ornamental bricks, but we’ll have to see if that looks too busy.

After we’d finished for the day, I went to get the cakes.  Tilly was lying asleep in the drive and she was so still and limp that I was anxious for a minute.  I went and stood looking, saw the rise and fall of her ribs and then, sensing I was there, she looked at me in a “What?” manner – I reassured her and went indoors.  Noticing on the way that there was no table on the lawn, I remembered that it’s still in Al and Dilly’s garden, as we’ve had a couple of family parties there.  So I took the cakes and then asked permission to have tea with them and, of course, invited them to join us. 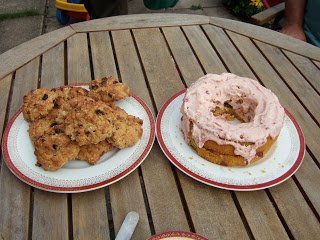 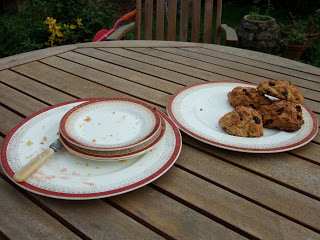 After a while, I realised that Pugsley was looking at me.  “Would you like another piece of cake?” I asked.  “Yes please.”  He hadn’t been doing the hard stare that his father did as a child (his Paddington stare) but had been very polite, merely hoping.

Al was surprised that the rock buns could be demolished quite easily.

I give you ‘before’ and ‘after’ photos.  I insisted that there should be something left for our elevenses tomorrow, assuming it doesn’t rain.  Rain is forecast, but that doesn’t necessarily mean much, as it doesn’t rain as much in this village as in some others.