It’s so useful having a clergyman and a churchwarden on the bricklaying . Not that we have a hotline or anything, but it hasn’t rained all day, although yesterday showers were forecast. The first course of bricks has been laid, the second only lacks a couple of bricks because we ran out of mortar (making another batch would have meant lunch being late – no brainer, don’t you agree?) and the second pillar has been started. 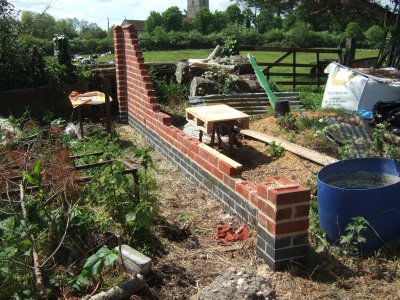 It’s overgrown and weedy on the left of the picture because that was where one of the three compost heaps used to be and, just out of sight, is a greenhouse. Against that stretch of wall a potting shed will, if we get around to it, be constructed. We’re hoping to get the whole wall (this is only the first and smallest stretch) constructed by the autumn if all goes well, though sense goes before sensibility here and if it doesn’t get finished we’ll just do what we can and finish next year. Still, although I’m only free on Wednesday this week, I’m free every morning but Tuesday next, so we’ll see how it goes.

I bought some lovely sea bass from Paul the Travelling Fishmonger, this morning, at fairly vast expense, and didn’t go shopping otherwise so I had to scout around. Fortunately, I had some broccoli and some potatoes, with which I decided to make a favourite dish: Spicy Masala Potatoes. I checked the recipe. Hm. It was already well after 6 pm, but worth a try… I phoned the shop. Al was still there. “I need a few more things, can you bring them please?” He was relaxed about this. Well, this is the lad who, at just before 9am, rang his father and asked him to go to the mushroom farm any time such as right now. “A chili, an onion, some ginger and some fresh coriander, please.” I had the other ingredients, but I somehow feel that without those a certain something would have been lost. Well, I’d have improvised, of course.

Anyway, Dave has met the whole family now, except my sister. We have plans for the children each to take on a course of bricks in order of their height. Tilly can carry the bricks on her back (she’s the dog, BTW) and the wall will be built in No Time.