Dave and I agreed that it’s not quite so much fun, now that the weather’s getting chillier. We’ve still been really lucky – if the dry weather holds to the end of the month we hope to be ready to call a halt until next spring. Late spring, when it’s warm again.

Dave and the Sage decided that all the tiles would be laid and then putting on the triangular caps will be the last job of all. I’m still plugging away at the pillar, which I find very tricky – making sure all the bricks are exactly level and not overhanging one side or the other, and finishing off the mortar is awkward too, as it drops off as you try to smooth it round the corner. Still, I think I’m starting to get the knack a bit better.

This is the section that Dave did 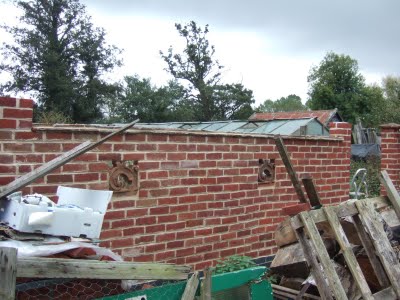 This is what I was working on, from each side. Yes, the kitchen garden is looking very untidy and end-of-yearish. The nearest bed had squashes in, they’ve been harvested but haven’t been cleared yet. You can see that some of the Jerusalem artichokes are quite droopy with the dry weather, but some of them are in flower, which is the sign of a long autumn. Where they’re planted used to be the end of the kitchen garden, so you can see by how much it’s been enlarged. 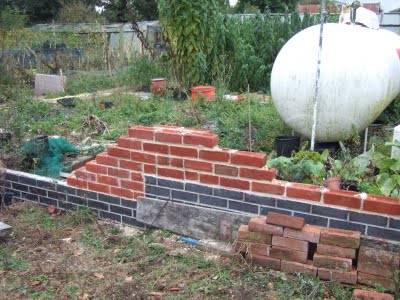 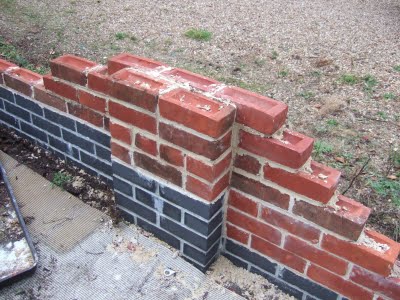 The Sage and Dave putting the finishing touch to an end pillar.

In other news, as they say, I seem to be getting a chest infection. I’ve been really tired all day – I’ve had two long sleeps on the sofa and I’ve got a painful cough from deep in my lungs. It’s come on quite suddenly, I was fine yesterday and haven’t had any sign of a cold. I went to get my hair cut today and drove in, not wanting to breath in all the cold air first thing in the morning on my bike. I don’t think I’m getting flu because I don’t have a temperature and I haven’t stopped eating. Or drinking. Mind you, a bit of a disaster when I discovered that I’d used (well, I should have known but I’d forgotten) that I’d used all the white wine in the risotto last night. I thought I’d got a bottle of vodka in the freezer but it was gin and I hadn’t anything I could drink with gin. Fortunately, I knew there was a can of beer in the dining room. The Sage offered to get it, as I was cooking dinner at the time. He came back clutching a can .. of Dave’s Pepsi Max. Really, how unworldly can a chap be? – can’t tell the difference between Carlsberg and Pepsi. Not that either of them are exactly epicurean drinks and I doubt my husband has ever drunk either of them, but all the same.