On top of the bricks, there will be a couple of rows of tiles, which are wider than the bricks so as to help to deflect rain away. On top of that will be a final, triangular brick to finish it off.

The tiles are the original ones from the front (west) side of our own house and are between 400 and 450 years old. When we were planning to move here (the house belonged to the Sage’s parents: when his father died, his mother had built the bungalow where Al and Dilly now live) and then we had the tiles taken off, as the roofing felt and some of the timber needed to be replaced. It was discovered that the tiles were held on more through sheer Norfolk tenaciousness than anything else – all the nails had perished and some cement had been shoved in for strength, but that was adding more weight than body to the whole thing. They had been turned over a hundred or two years ago already and they were not really fit for the job any longer. So the Sage did some investigating and found a firm in Sussex that still manufactured hand-made tiles and, after getting the requisite planning permission, we had them put on instead.

He kept the tiles of course, and a while ago let a friend have half of them for an extension to his house. But we’ve still got a couple of hundred left and now they’re being incorporated into our garden wall. 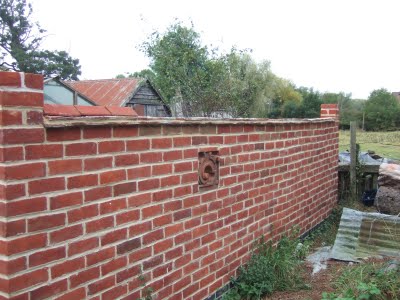 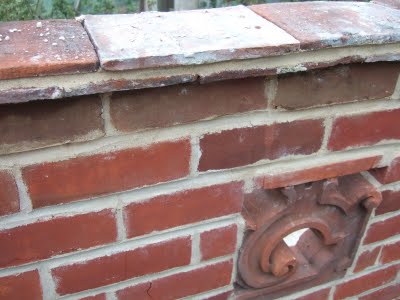 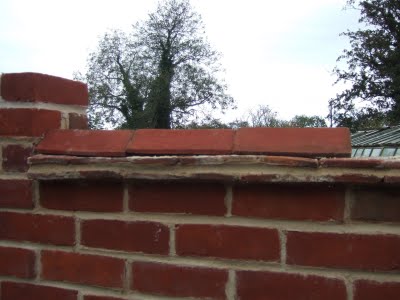 Dave started on the first section – when that’s done, we’ll get a longer run of scaffolding up and he’ll do one section and I’ll do one. He says it’s the trickiest job he’s done so far, which is a bit worrying. In the meantime, I built up a single layer of bricks along to the pillar, and I’ll work on that next time too, I think. 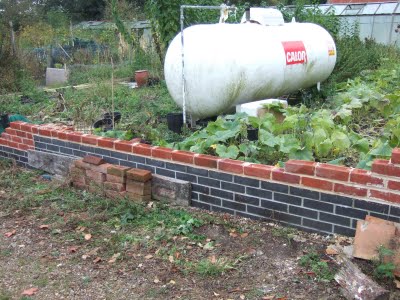 Scarlet and Pinkie were very interested in the whole affair and spent the entire morning standing at the gate watching us. They are quite irresistible and we had to keep going to feed them. I found some apples and carrots, then we gave them hay and, afterwards, the Sage went in to Alex’s shop and raided the throw-out bin and came home with a box of slightly yellowed sprouts. I cuddled the cows affectionately – they are in fine condition, the extra hay has been good for them and so has the additional grass, which has sprouted quickly after the rain of the past week. Pinkie is bagging up well (sorry, this is farmer-speak for she looks nearly ready to calve) and so they will both go back to the farm in a few days, ready to have their calves in the next few weeks.
I didn’t get a huge amount done, as I had a couple of phone calls to deal with. Five 6th form pupils from the high school were involved in a car accident on their way to school – it’s a tricky bit of road. The details of the accident aren’t known yet, but four of the young people are not badly hurt, one is, but is expected to recover fully, and the driver of the other car has a similar description. Everyone at school is very shocked and we cancelled this afternoon’s governors’ AGM. The front seat passenger (the most badly hurt) was trapped in the car and so was the other car’s driver; they both had to be cut out and were air-lifted to Norwich hospital. I’d seen the air ambulance go over, earlier.

Could be so much worse, a dreadful thing to happen, but on the local news tonight there were several reports of enquiries into road deaths and at least we don’t have that on this occasion.

Oh, do you know, I had an email from my friend A yesterday – we aren’t on the same committee any more so email now we don’t see each other much – he replied to what I said and then said that nothing fascinating had happened so he’d nothing more to add. What? No, really darlings. No, really. If I waited for something fascinating to happen, I wouldn’t have a blog. And then how much poorer would my life be?

I’ve written back, saying nothing much has happened. That is, if he wants me to talk to him, he’ll have to talk to me. Not that I said that, of course.