A short afternoon’s work today, and I wasn’t sorry, from my own point of view. I woke up at 3 am, couldn’t sleep again and eventually got up, and was stiff and achy all day. Still, Dave built to the top of the end pillar, except for the capping which we’ll do in one go next week and/or the week after.

A treat today, a little glimpse of the Man Himself in action. Here you are.

And a couple of photos – 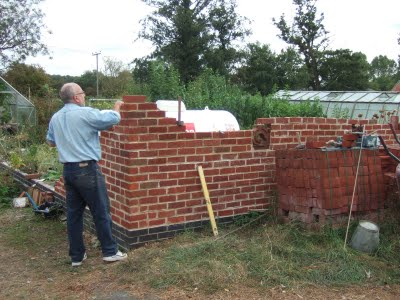 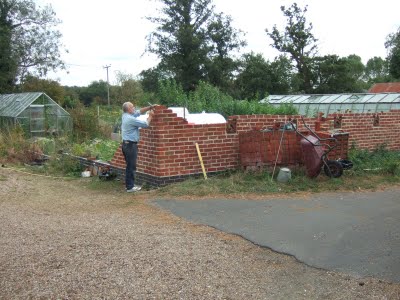 Dave is due to come back tomorrow afternoon (the Sage has found out that there’s a chance I’ll make cakes for tea if we’re building in the afternoon, so he’s encouraging that) but we’re not sure there’s much I’ll be able to do. It’s getting to a height I can only just manage, though I expect I can still do a dozen or so bricks before I’m sent back to the kitchen where I belong.

The installing of the new London boiler seems to have been sorted out okay, but as at any time when something is taken out and replaced, the fittings aren’t quite the same, which means some making good will be required. I can’t bother the tenant again – he’s sent some photos which are useful, but I don’t feel able to ask him to take measurements as he’s put himself out enough already, and besides one just has to see and evaluate it. So I think I’ll go down next week, do some preliminary work and measure up and the Sage will go down after that and do the carpentry. I want to go to several exhibitions this autumn so it will be no hardship as long as the trains don’t get delayed or cancelled.

The Sage has been shopping again, both from a dealer and privately. He’s spent about as much as I have on the boiler and gas checks etc. He’s had more fun. I think I’ll have to have a mini-spree myself. Mind you, I’m enjoying the music Ro passed on to me. For the last few days I’ve been obsessed with Tom Waits’ Alice, which is fabulous. Yes, I know it came out in 2002 or something. That doesn’t mean I have to have heard it before, does it? I’m usually at least a decade behind-hand, this is rather efficient for me. I’ll see Ro at the weekend, I’ll thank him again. Of the music he gave me, I still have to learn to love Nick Cave.