I went downstairs early and started baking. By the time Dave arrived at 20 past 9, the cakes were out of the oven and I made tea for us all. It felt quite strange to get back to bricklaying, as I’ve done so little of it for the last weeks, but I soon got into the swing of it. It seemed to go quickly too, as I was simply filling in between two sections and could slap enough mortar along for several bricks at a time. The weather started cool and cloudy, briefly rained (really briefly; a few big drops for just 10 seconds or so, then it stopped) and later the sun came out and made us unexpectedly warm.
Dave’s bit 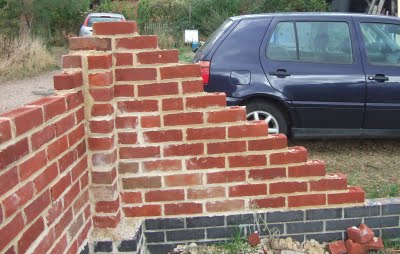 From the other side. I don’t stand up straight so most pictures lurch slightly to the right. 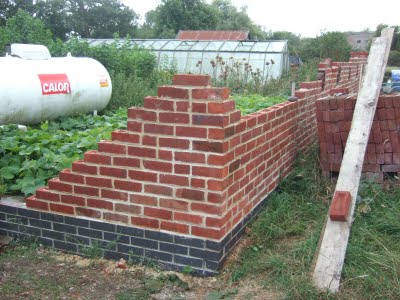 I think the Sage and Dave were puzzled at the time I took to prepare lunch, as I’d said I was cooking omelettes. Of course, I was also icing and decorating a dozen fairy cakes. Since it’s not his birthday until tomorrow, he begged me not to sing to him. Of course, if ever he heard me sing he would implore me never to do it again. I tried to light the candle, but it was too windy, so here is the best I could do.
Observe the bantams strolling across the lawn. 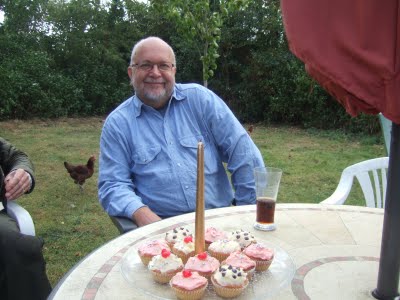 The other exciting event of the day was Squiffany starting school. As she’s only just four and a half, she will only go half days for the first term. She was smiling and happy when I hurried out with my camera to wave her on her way and posed for me outside her house.

Later this afternoon, I went to the hairdresser and called in on the way home for fruit from Al’s shop. “How did she get on?” I asked (he’d been home for a couple of hours this morning). Weeza and Zerlina had come over for the day and had gone, with Dilly and Pugsley, to fetch her home. “She came stomping in before them muttering ‘all this work to do’ and went straight to her room. When I went in she was at her desk looking for something. I asked how she got on and she said ‘I’ve got to do my homework, hundreds of work. Can you lend me a pencil, please?'” “She enjoyed it then?” “Oh yes, she had a great time. She said to Pugsley that she’d missed him and picked him up and gave him a big hug and he hugged her back and said he’d missed her too” Later, she was quite tired and cuddled up with Mummy and P on the sofa, and then, with Weeza, they made gingerbread men. So the day went rather well.