Good to have a day when there wasn’t any likelihood of rain. Dave worked steadily all morning, but I had a few interruptions and so didn’t get as much done as yesterday and we decided not to have a final mixing of mortar as it would have taken a long time to use it up.

During the morning, when the Sage was out for a while, we were talking about the days we’re free next week. Dave had already said he couldn’t manage Monday “and the Sage is busy on Tuesday and Wednesday”. “This is the first I’ve heard of it,” I said, startled. “Maybe I shouldn’t have mentioned it,” he worried – “no, he should have mentioned it to me!” The air turned blue for a while (sorry, Dave) as I gave my opinion on the matter. Then I asked if he knew where the Sage was going? “He said something about picking china up” said Dave, who was playing it neutral, straight and cool – I said “ah, take some of that back, he’s going to London on Tuesday. I unsay the effing. Hang on, I don’t know about Wednesday though.”

I explained my reasoning regarding getting cross. I do it while the Sage isn’t there, usually when I’m on my own (sorry, Dave). Then, when he returns, I ask pleasantly what is going on? This is also a failsafe against making an embarrassing mistake. So I asked. It turns out that the Sage is planning to stay in London overnight and then do another business call on the way home. “So that’s why, when I said last week that I’d like to come to London with you, that you were tying yourself in knots trying to put me off without telling me why?” He tried to deny it, but I know him too well. “When would you have told me?” Monday. Hm. I chose to laugh and kiss him.

Much as I dislike the Sage’s habit of keeping secret things that he knows I need to know, for as long as possible (and he’d hate it if I did it to him), I’m quite looking forward to a couple of days to myself. My main quandary is always this – do I use his absence to not bother to cook, or do I cook something that I love and he doesn’t?

Anyway, the pictures, one from each side of the wall. Today’s ornamental brick marks about the half-way point in this main section – in fact, I’ve just been out to do some rough measuring. 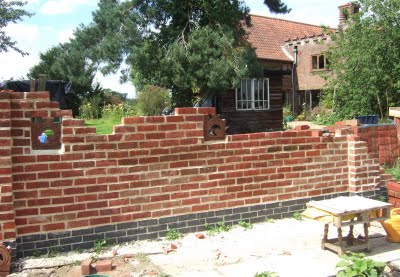 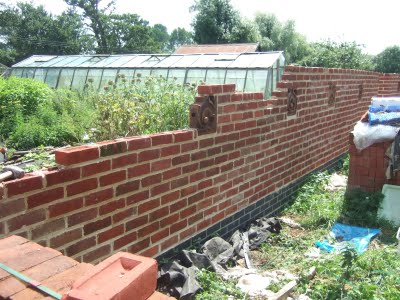 The first section is about 18′ long and that’s done apart from the capping, which the Sage and Dave are talking of doing while I’m away in a couple of weeks. Today’s ornamental brick comes in at about 24′ of the main length and more than half of the bricks are laid of the next 6′ – 10 rows out of 16 – with about 25 bricks to fill in between the two ornamental bricks. Then there’s another 18′ virtually unstarted of this length. It’s possible to get that done in the next month if we have about 10 sessions and, since pillars have to be built up to; that is, you can’t just build a pillar but have to stage the bricks either side for support, we’ll have to go round the corner as well. There’s about another 35′ of that section, most of which won’t be done until next year. Once we get to September, the time available for bricklaying will diminish drastically.

Dave and I (we haven’t mentioned it to the Sage yet – well, he was out at the time – think there should be a party this year when we finish bricklaying – will you come?