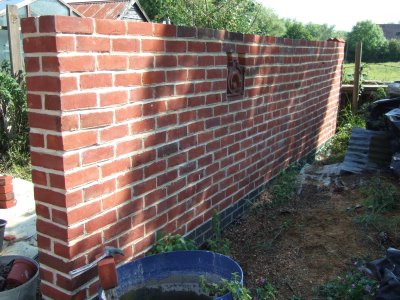 Because it was raining at 8.45, Dave and I decided to wait and see how the weather looked in a while. By 8.55, it was fine here, and so it was all morning. But the decision had been made to go for it during the afternoon. It’s been changeable. A couple of sharp showers, and thunder in the distance, with hot sunshine in between.

I did a few bricks while I just had Pugsley, but after I’d fetched Squiffany home too, I left it to the men and joined in again once Dilly arrived back. By that time, they’d finished the first section and were carrying on with the next piece at ground level, so I started building up towards the pillar that Dave had started a couple of weeks ago.

The first section isn’t finished of course, as it will be capped, but all the bricks have been laid. We’ve decided to leave the ornamental brick where it is – probably – it can always be cut out and reinserted later if we want to. We have, however, agreed both to put them in sideways on to the first one, and to put them at least one course lower, as only two bricks being above looks slightly out of balance.

The Sage lays a few bricks, and he did the final one today, just before it started to pour with rain. I’d already covered the work I’d been doing. 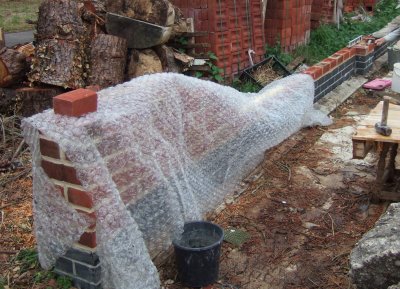 Nothing more now until next Monday – weather permitting. So I can regale you with senseless witterings in the normal manner. Is that not a happy thought?