I heard the rustling again today and then I saw the mouse again.  It wasn’t a house mouse and it was looking worried.  I was worried too.  Now I’d seen it, I didn’t want to set a trap to kill it – yes, I know about humane traps, but mice, when released, come straight back in again, so we’ve never used them.  I got a cushion and put it ready.

A while later, it came out again, and was moving very uncertainly.  I dropped the cushion over it and reached underneath to fetch out the little creature.  I fumbled for my phone to take a picture – as ever, I think of you first, darlings – and it sat in my hand with no attempt to get away.

It was a dear little thing, a vole rather than a mouse, and I carefully put it out in the garden, where it sat without running away.  I had to leave for a meeting, but got back an hour or so later and checked and it was still there, shaking hard.  I picked it up again and it seemed glad of the company.  The Sage was home by then.  “Maybe it’s hungry?” he suggested.  I asked him to get some of the chopped maize we buy in for the chickens.  It was so sweet, it immediately picked up a piece – with its back foot – and started nibbling.  Thinking it would be easier to eat, the Sage went and fetched some bread, but it was too busy with the corn.

“Shall I put a box for it in the porch?” asked the Sage concernedly.  I discovered that the Sage is a kinder and more sentimental person than I am.  “Er, it’s a vole.  A wild vole.  Let’s not make a pet of it, hey.  I’ll find somewhere safe for it and we will leave it.”

I’m not checking.  If it doesn’t make it, I’d rather not know.  As far as I’m concerned, I’m just glad I didn’t kill it and did do something practical to save it.  But that’s about it.

By the way, you know how mice haven’t got sphincters and so, when you’ve handled one, your hand smells of wee?  Voles evidently have, because it didn’t.  Fairy clean, as I used to say to my daughter after a bath (some 30 years ago). 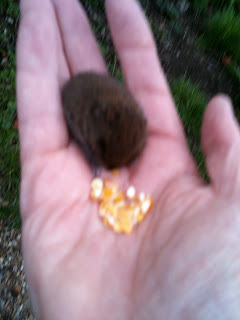 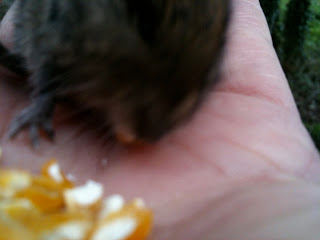 I did wash though.  Obv.