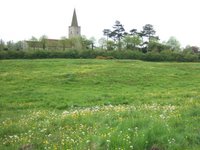 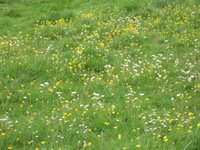 Another jolly morning. Al left Grandbaby Squiffany with me for half an hour while he went to help E. open the shop. In that time, she cuddled the dog, the chicks and a chicken, waved carrots hopefully at the cows, who were too busy ruminating to bother to walk across the field, and had a ride in K’s nim cart (electric buggy, so called because they don’t go vroom vroom, they go nim nim). She then was tired and we turned on CBeebies; of course that was the instant her father arrived home and caught us.

But that isn’t the particularly jolly part, that’s just setting the scene. It was time for Dilly’s 20-week scan and they invited me to accompany them to the hospital. Squiffany and I amused ourselves for half an hour in the waiting room while the scan was being done – they do measurements of bones, check vital organs etc at this stage. All is well, they have a 6 inch long baby, plus legs (two of them), and we know its sex and, oh, no reason to boast as it’s no accomplishment, but I can’t help being pleased that I was the first person they told. So we went out for lunch to celebrate (just a sandwich and cake as D. had to get back to work).

I am usually a remarkably unobservant person, but at this time of year I am particularly aware of the countryside. I love to see the new growth of leaves on the trees and hedgerows and the blossoming of the blackthorn and may would make me quite lyrical, if I were the poetic type. Even the weeds in the flowerbeds (for I don’t spend time weeding flowerbeds) look fresh and attractive now. I enjoy driving along Norwich’s southern bypass, the A47, at this time of the year because a bright person had the idea, when it was constructed, of planting cowslips along the embankment. These have spread over the years and look so pretty just now. The meadow saxifrage is just coming into flower on the field and along our drive and, soon, it will be joined by buttercups and I will sigh sentimentally to see the cows lounging artistically, being only too well aware, I suspect, that the flowers set off their black and white colouring rather well. The farmer sends his friendliest dry cows (from his milking herd) over here for the last few weeks before their calves are due, so that we can stroke them and feed them leftover veg from the shop.

6 comments on “Being sentimental. Ignore me.”